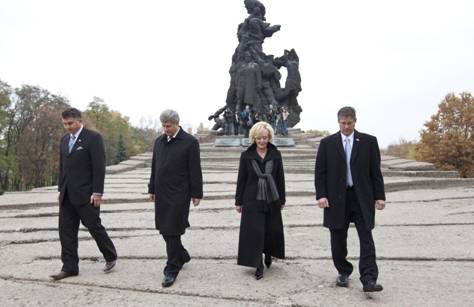 Ottawa, ON – James Bezan, Member of Parliament for Selkirk-Interlake visited Ukraine with Prime Minister Stephen Harper early this week. Bezan joined the Prime Minister in meetings with Victor Yanukovych, President of Ukraine and announced a number of bilateral initiatives, including a new youth mobility agreement and free trade negotiations.

“I was honoured to be included as part of this historic visit by Prime Minister Harper to Ukraine.”

“The importance of Canada- Ukraine relations were underscored during our visit by the Prime Minister signing a youth mobility agreement, announcing six new CIDA projects and initiating the second round of free trade talks.”

“Canadians and Ukrainians were proud of the direct and principled stance taken by the Prime Minister. He clearly stated that all freedoms, human rights, democracy, and the rule of law must be respected in Ukraine.”

“I was especially proud when Prime Minister Harper called the Holodomor a genocide and clearly demonstrated Canada’s commitment to tell the entire story about this atrocity.”

“It was very moving and sobering to visit many sites, such as Holodomor, Babyn Yar and the Lonstky Street Prison, where some of the most heinous crimes against humanity were perpetrated against the people of Ukraine. Vast amounts of Ukrainian blood have soaked the fertile lands of Ukraine over the generations by totalitarian Soviet and Nazi regimes. We must never let history repeat itself.”

This year marks the 119th anniversary of Ukrainian settlement in Canada.  Canada was the first Western country to recognize Ukraine’s independence, which attests to the close ties the two countries enjoy today.