FOR IMMEDIATE  RELEASE (with photo) 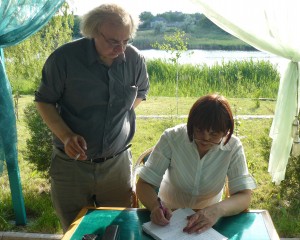 Documentary Genocide Revealed Wins Indie Fest International Award
Montreal:   The historical feature documentary Genocide Revealed produced and directed by Yurij Luhovy has won the prestigious Award of Merit at the Indie Fest International Festival held at La Jolla, California.
The 75 min. documentary is narrated by Oscar-nominated actor Graham Greene and voice-overs are by actress Jill Hennessy and actor Lubomir Mykytiuk.
“How amazing! I am very honoured Genocide Revealed has won at the Indie International Film Festival.  This award helps give international awareness to a genocide that has been deliberately silenced for too long. I wish to thank everyone that helped support the making of this film.”
The Indie Fest “recognizes film professionals who demonstrate exceptional achievement in craft and creativity, and those who produce stand out entertainment or contribute to profound social change and compelling documentaries.  An international awards competition, entries are judged by highly qualified processionals in the film industry”.
“In winning an Indie, Yurij Luhovy joins the ranks of other high-profile winners of this internationally respected award.”  Thomas Baker Ph.D., who chairs the Indie Fest further stated, “The Indie is not an easy award to win.  Entries are received from around the world.  The judges were pleased with the exceptionally high quality entries. The goal of the Indie is to help winners achieve the recognition they deserve.”
Genocide Revealed will receive The Indie statuette, which is manufactured by the company that makes the world’s most prestigious and celebrated awards, the Oscar, Emmy, Clio and MTV Video Music Awards.
Yurij Luhovy is presently making a shorter version of the documentary (52min 30sec) for educational purposes.
To arrange for a film showing or to order Genocide Revealed call (514) 481 5871; email mmlinc@hotmail.com; write to 2330 Beaconsfield Ave, Montreal, Quebec, H4A 2G8 or go to the site: www.yluhovy.com
– 30 –
Photo id P1040994
Director of Genocide Revealed Yurij Luhovy with historian-researcher Nina Lapchynska finalizing shooting schedule in Donetsk oblast.
Contact:
MML Inc.
514 481 5871