The National Holodomor Education Committee (NHEC) has had a very busy, productive schedule these past six months.
Ontario added several more school boards to the Toronto District School Board in commemorating Holodomor Memorial Day in their schools, thanks to the dedicated work of the Toronto Holodomor Education Team.  On Jan. 21, 2011, the NHEC took part at the Ukrainian Canadian Research and Documentation Centre in a meeting with Clint Curle, senior researcher at the Canadian Museum of Human Rights (CMHR), who was interested in finding out what resources were available on the Holodomor. At the meeting, Frank Sysyn, IroidaWynnyckyj,  SvetlanaMedvicky, OrestZakydalsky and Valentina Kuryliw presented  information on the Holodomor and arguments for its inclusion as an important  teaching tool within the CMHR.
To promote the teaching of the Holodomor in Canadian schools, in-service presentations for teachers – with information, resources and teaching materials — are required.  To date, in 2011 the NHEC has held several such events in the Toronto area.  On Feb. 18th. 2011, the Toronto District School Board invited Valentina Kuryliw to present a workshop on the Holodomor to history teachers at the board-wide Professional Development Day.  Attended by twenty-three educators, most of whom knew little about the Holodomor, this session ended with grateful teachers armed with a Holodomor Teaching Kit for their school, and preliminary information on the Holodomor. Another workshop at Loretto College School of the Toronto Catholic District School Board on March 24, 2011, saw an enthusiastic group of educators, eager to discuss issues surrounding learning about the Holodomor, and its teaching.
In Western Canada, two exciting initiatives are being planned.  For the first time, the Summer Session, Faculty of Education, Social Justice Studies, of the University of Manitoba is offering credit courses for teachers and students in July 2011, using the Internment of Ukrainians in Canada and the Holodomor as case studies. This will entail both an emphasis on historical context and pedagogical strategies for teaching the topics. This initiative was the inspiration of D. Hlynka (a member of the Manitoba HET) and O. Cap. 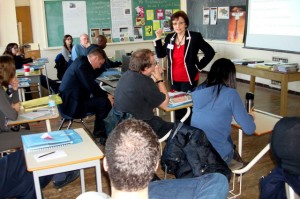 2011 will be the year to see the Holodomor being recognized and taught widely across the country with workshops for educators, teaching materials produced and the creation of a Canadian Centre for Holodomor Study and Education for coordinating and distributing these and other resources across the country.

Reflections on the XXIII Triennial Congress of Ukrainian Canadians

UCC Welcomes the Signing of the Youth Mobility Agreement