The Ukrainian Village [VIDEO]11 June 2011Next

The Historical Train of Ukrainian Pioneers project was launched by the Embassy of Ukraine in Canada with the aim of retracing the journey that many Ukrainian pioneers took at the end of the 19th and early 20th centuries. This project will start in Halifax and continue through Montreal, Ottawa, Toronto, Winnipeg, and Saskatoon. Passengers on this train will have stopovers of between 1 and 3 days in each of these cities, where they will participate in cultural events organized in cooperation with local Ukrainian communities. The project will culminate in Edmonton.

The Train of Ukrainian Pioneers Project has three objectives: to unite culturally Ukrainian communities in different Canadian cities, to attract media and public attention and inform the general public about how the Ukrainian community contributed to the development of Canada, and to celebrate the 120th Anniversary of Ukrainian settlement in Canada.

The following will participate in the cross-country events:

–        Leaders of Ukrainian communities in Canada

The overall sponsor of the Train venture is VIA Rail.
Other general sponsors  include Borden Ladner, Gervais,
Canada Inns, and others. 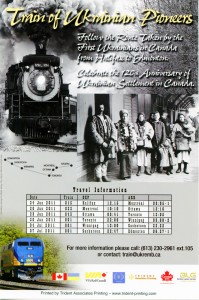