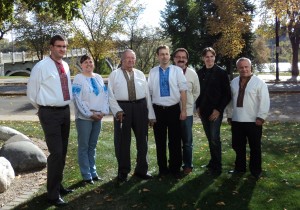 Representatives of the Ukrainian Canadian Civil Liberties Association (UCCLA) and

officials from the Canadian Museum for Human Rights (CMHR) spoke during UCCLA’s annual conclave, held this year in Saskatoon.

“We were very pleased that Stuart Murray, CEO of the national museum, arranged for our teleconference with museum content experts Dr. Rhonda Hinther and Dr. Clint Curle,” said R.W. Zakaluzny, chair of the UCCLA. “Both they and Communications director Angela Cassie assured us that the CMHR remains dedicated to reaching out and consulting with all Canadians. In response, the UCCLA confirmed that we remain dedicated to ensuring all 12 galleries in this publicly funded museum are inclusive, comparative and thematic in their treatment of the many episodes of crimes against humanity and genocide that occurred before, during and after the Second World War. We will continue to insist upon that, even after the museum opens next
year.”

The UCCLA executive began their three days of meetings with a public lecture at the Ukrainian Museum of Canada by Professor Lubomyr Luciuk, the UCCLA’s Director of Research, who gave a fulsome speech on Canada’s first national internment operations, and how those operations related to the human rights museum.

The UCCLA met with Slawko Kindrachuk, president of the Saskatchewan provincial council of the Ukrainian Canadian Congress, and Catherine Schabel, chair of its Holodomor awareness committee. Both groups shared information and vowed to work together on several projects of mutual interest.

Members of the Ukrainian Canadian Civil Liberties Foundation (UCCLF) also met for their annual general meeting in Saskatoon, initiating a series of new book prizes for academic achievement at five universities in Canada. It is hoped that book prizes will be created in memory of Kari Moore at the Slavic Studies Department of the University of Victoria; to honour Yevhen Harasymiw at the University of Alberta’s Faculty of Law; to recall the service of Ft. Lt. Bohdan Panchuk at the Prairie Centre for Ukrainian Heritage at the University of Saskatchewan; to mark the valour of Cpl. Filip Konowal at the Royal Military College of Canada; and to remember internee survivor Mary Manko Haskett with a prize through the Chair of Ukrainian Studies at the University of Toronto.

The UCCLF also elected a new executive. Andriy Harasymiw of Edmonton has taken over as chair, assisted by Ryan Boyko of Toronto as a director, with Calgary’s Borys Sydoruk continuing in the role of treasurer.

The next joint UCCLF and UCCLF conclave will be in Halifax Sept. 27-30, where the groups will hold a commemoration ceremony at The Citadel, site of one of the 24 internment camps that held Ukrainians and other Europeans during Canada’s first national internment operations of 1914-1920.