La Ferme, Quebec: The official inauguration of Spirit Lake Internment Interpretive Centre, the first such Centre of its kind to open in Canada, will take place on Thursday, November 24, by-invitation only, with a reception to follow.  Among the special guests will be representatives of the federal, provincial and municipal governments, representatives from Montreal, Quebec City as well as, the surrounding cities and towns of La Ferme, including Rouyn-Noranda and Val d’Or.

Since the Centre’s opening to the general public on June 28, 2,500 visitors have visited the historical site in La Ferme, situated in the Abitibi-Temiscaminque region, 8km from Amos.  The Centre, established at a cost of 1.2 million dollars, was made possible with a major grant from the Canadian First World War Internment Recognition Fund set up by the Canadian government and administered under the Shevchenko Foundation.

Spirit Lake was the second largest of 24 internment camps set up during Canada’s first national internment operations of 1914-1920.  The Spirit Lake Internment site, which was open from January 13, 1915 and closed on January 28, 1917, has had significance for Quebec, as many of the 1,200 unjustly interned at Spirit Lake were taken from Montreal and area.  It has been in the distant memory of the Montreal Ukrainian population in particular for decades.  Ground setting research on Spirit Lake was begun over thirty years ago during the production of Yurij Luhovy’s documentary films Ukrainians in Quebec and Freedom Had A Price. The Centre depicts a story of immigration and the unexpected and often painful challenges that confront immigrants coming to a new land.

During the three-year process of building the Centre, Camp Sprit Lake Corporation, a non-profit board consisting of 9 board members chaired by James Slobodian, has received full support and cooperation from the surrounding communities, businesses, municipal councils in the Abitibi-Temiscaminque region as well as, support from Montreal and Quebec City.   The success of this project is a testament of the co-operation with the francophone population of Quebec that deems it imperative to learn about the history of their region and the people that settled it.  The support of various businesses in the area greatly contributed to the completion of the work and is allowing the operation of the Centre all year round.  Spirit Lake Internment Interpretive Centre is welcomed as an important cultural-educational institution sharing with the general public and informing future generations the history of one aspect of Canada’s early development. 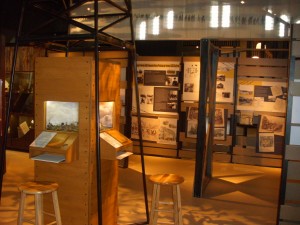 Part of the display area at the Spirit Lake Centre. 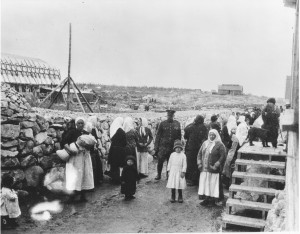 From Freedom Had A Price