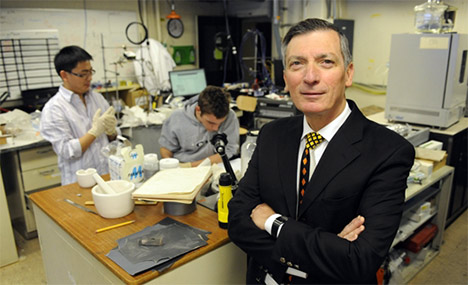 Donald Sadoway was born on March 7, 1950. Sadoway is of Ukrainian heritage and was raised in Oshawa, ON by his second-generation Ukrainian immigrant parents. He attended the University of Toronto for both his undergraduate and graduate degree, receiving his PhD in 1977. During his studies at the University of Toronto, he was President of the Ukrainian Students’ Club. Sadoway was a youth member of the Ukrainian Orthodox Church of Canada (CYMK) and had been the choir Director at the local Ukrainian Orthodox Church in Cambridge, Massachusetts.

Dr. Donald Sadoway’s main area of study is on chemical metallurgy. Sadoway received a NATO postdoctoral fellowship from the national Research Council of Canada and went to MIT to conduct postdoctoral research under Julian Szekely. Soon after, in 1978, Dr. Sadoway joined the MIT faculty.

Dr. Donald Sadoway is the John F. Elliot Professor of Materials Chemistry in the Department of Materials & Science & Engineering at MIT. He is best known for his expertise on batteries and has done a vast amount of research on how to improve the performance and longevity of portable power sources. The combination of his teaching methodology and his unique lecture style has made his course one of the most sought-out courses in his field.

The popularity of his course has gone beyond MIT – Microsoft CEO Bill Gates was quoted in the Seattle Post-Intelligencer stating “…everybody should watch chemistry lectures – they’re far better than you think. Don Sadoway, MIT – best chemistry lesson anywhere. Unbelievable.”

Dr. Donald Sadoway has not only lectured in North America. In the 1990’s, he travelled to Ukraine and gave a lecture in Ukrainian at the Institute of the Ukrainian academy of Sciences on the topic of electrochemical synthesis of new prospective materials.

Dr. Sadoway is one of the world’s leading researchers in the area of materials engineering for energy-storage technologies. In the recent TED2012 talk: Full Spectrum he spoke about “The Missing Link to Renewable Energy”, describing the future of large-scale batteries that store renewable energy. To watch video click here TED Talk – Sadoway.

“On behalf of the Ukrainian Canadian Congress, I would like to congratulate Dr. Donald Sadoway on his recognition for his many efforts and countless accomplishments”, said UCC National President, Paul Grod. “His dedication to reduce carbon pollution output has truly given us a glimpse into the future of energy. We are proud that he is one of our many successful Canadian Ukrainians making a difference in our world”.

Professor Donald Sadoway has been named by Time magazine as one of the “100 Most Influential People in the World” for the year 2012.