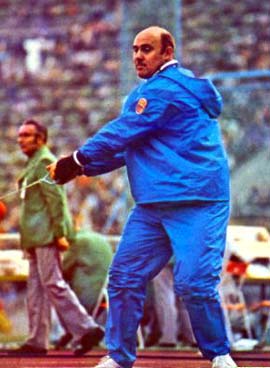 Anatoliy Pavlovych Bondarchuk born 31 May 1940 in Starokonstantinov is a retired Soviet hammer thrower, who is regarded as the most accomplished hammer throw coach of all time. Anatoliy Bondarchuk was also a noted author having written his signature work “Transfer of Training” in 2 volumes.

As an athlete, Bondarchuk accumulated numerous international awards and honors throughout a long career. Beginning the hammer throw at a relatively late age, he won his first international title in 1969 with a win at the European Championships. Near the end of the season, Bondarchuk set two world records in the event. The latter record of 75.48 meters was the first throw in history over 75 meters. Bondarchuk continued to remain among the world’s elite for several years and won the gold medal at the 1972 Summer Olympics while setting an Olympic Record of 75.50 meters. Four years later, he earned the bronze medal at the 1976 Summer Olympics. As an athlete, Bondarchuk trained at VSS Kolos in Kiev. Bondarchuk was awarded the Order of the Red Banner of Labour (1976) and the Order of the Badge of Honour (1972).