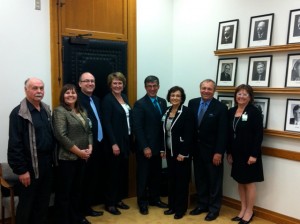 On October 3, 2012 a delegation of UCC representatives of the Provincial Council of Saskatchewan and UCC Chair, of the National Holodomor Education Committee as well as Andrea Malysh, Program Manager of Canada’s First National internment Operations of 1914 to 1920 met with Russ Marchuk, Minister of Education  for Sask.  and Ken Krawetz, Deputy Premier to discuss the inclusion of two topics, Canada’s First National internment Operations of 1914 to 1920 and the Ukrainian Famine-Genocide, the Holodomor , into the new Saskatchewan curriculum in history and social sciences.

The meeting with Mr. Marchuk and Mr. Krawetz was very successful, and ended with Mr. Marchuk’s  suggestion to set up a group of experts from the UCC to work alongside the Ministry of Education officials to make sure that these two topics received their proper place in the new Saskatchewan curriculum.

The meeting with Brent Toles, the social Sciences Consultant of the Ministry of Education followed and dealt with future plans for sharing expertise and resources with Ministry personnel on the above mentioned topics to be considered for inclusion  in the curriculum. Directives from the Minister were still to be received to properly commence the collaborative process.

Regina Catholic School Division was the first school division in Saskatchewan to commemorate the Holodomor in their schools in 2011.

Miles Meyers, the Coordinator of Catholic Education Services is responsible for spearheading this initiative. at a special morning meeting , we discussed sharing resources, in-service teacher training and the necessity of having the Holodomor as a permanent yearly  issue before the student body.

It was a first step in the process to include the two topics in the new curriculum and will be an ongoing item until its completion.