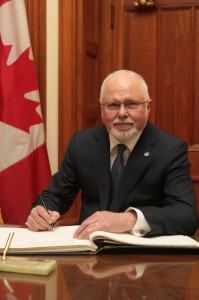 NOVEMBER 22, 2012, OTTAWA, ONTARIO – The memory and experiences of survivors of the Holodomor –the Ukrainian Genocide in 1932 and 1933 – were commemorated on Thursday, November 22, 2012 at Parliamentary evening ceremony dedicated to honouring those who both perished and survived the man-made tragedy.

Members of the Catholic and Orthodox Churches, Senators, Members of Parliament and dignitaries were present to show their support alongside a solid force of members of the Ukrainian Community who travelled from across Canada to be at this event.

“The Government of Canada is committed to remembering the victims of the Holodomor and increase awareness of the horrors of the Holodomor Genocide” said Robert Sopuck. “The Holodomor represents period when Stalin’s government ruthlessly imposed exorbitant grain quotas – in some cases confiscating supplies down to the last seed – creating food shortages across the land.”

In addition, the Parliament of Canada unanimously passed Member of Parliament, James Bezan’s Bill C-459, the Ukrainian Famine and Genocide (“Holodomor”) Memorial Day Act which came into force by Royal Assent on May 29, 2008. The Act recognizes the Holodomor as an act of genocide and proclaims the 4th Saturday of each November Holodomor Memorial Day.