Prime Minister Stephen Harper Comments on the Situation in Ukraine

Call to Action: Together and united – we will prevail!03 March 2014Next 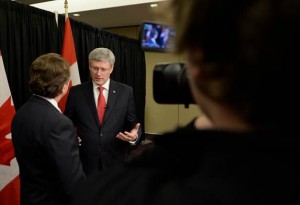 March 3, 2014- Today, while in Toronto Prime Minister Stephen Harper today delivered the following remarks on the troubling situation in Ukraine:

“The situation in Ukraine remains extremely serious for global peace and security.

“Canada and its G-7 partners have spoken with one voice in condemning President Putin’s military intervention in Ukraine.

“We call once again on President Putin to immediately withdraw his military.

“President Putin’s actions have put his country on a course of diplomatic and economic isolation that could well see Russia exit the G-8 entirely.

“Canada has suspended our engagement in preparations for the G-8 Summit planned in Sochi.

“We have also recalled our Ambassador to Russia, cancelled any Government representation at the Paralympic Games, and I’ve instructed officials to review all planned bilateral interaction with Russia.

“I would also note the resolution put before Parliament today and encourage its immediate passage by all political parties.

“We will continue to work closely with our G-7 partners and our allies.

“I’ve also spoken today with the Prime Minister of Ukraine, and I’ve said the following to the people of Ukraine on behalf of Canadians: Canada pledges ongoing friendship and steadfast support for your efforts to defend your sovereignty, and to restore economic and political stability.”

To view a video of the Prime Minister’s full statement please click here.

To view related photos and video on the Prime Minister’s website, please click on the following link: