BY NATASCIA LYPNY, THE LEADER-POST 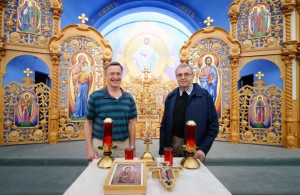 REGINA — If you visit the Saskatchewan Railway Museum, at the junction of Highway 60 and the Canadian National Railway southwest of Saskatoon, you’ll find a bronze statue of a worker affixed to a stone reading “Fortitude.” It’s a commemoration of Saskatchewan’s fleeting and largely unknown connection to one of the darkest parts of the 1914 War Measures Act: Canadian internment camps.

The Eaton Internment Camp was one of 24 forced labour camps across Canada created at the outset of First World War to imprison ”enemy aliens.” More than 8,500 prisoners of war and immigrants unconnected to the conflict — most of Ukrainian heritage — were sent to these camps to work on public projects such as the railway.

In 1919, the outbreak of Spanish influenza and disciplinary issues caused a camp in Munson, Alta., to relocate its internees to Saskatchewan, according to research by University of Saskatchewan professor Bohdan Kordan. They would only stay in Eaton for 24 days until further problems caused the 65 internees to be deported. The camp was promptly dismantled.

Despite Saskatchewan’s high Ukrainian population and its own connection to the camps, this part of Canadian history is little known by its residents.

Gawdyda said many of the newcomers from Ukraine he welcomes today have never heard of the Canadian internment camps.

An upcoming project by the Ukrainian Canadian Civil Liberties Association aims to change that. Project Cto — that means “one hundred” in Ukrainian — will commemorate the 100th anniversary of the War Measures Act.

On Aug. 22, 100 plaques across Canada recalling the internment camps will be unveiled at 11 a.m. local time.

“It’s a wave of plaque unveiling cost to coast. No one has ever done this in Canadian history,” said Lubomyr Luciuk, the project lead.

Saskatchewan is the site of nine plaques, in Saskatoon, Yorkton, Canora and Regina.

“It’ll be an education not just for the general public but for our own Ukrainian people,” said Jerry Zrymiak, parish council chairman of St. Basil’s Ukrainian Catholic Church, which will be unveiling Regina’s only plaque.

The commemorative aspect of Project Cto originates in an encounter Luciuk had a quarter century ago.

Luciuk grew up in Kingston, Ont., and often found himself playing on Fort Henry. It was only in completing his master’s in historical geography at Queen’s University, though, that he discovered the fort’s history as an internment camp.

In tracking down past internees — none are known to be living today — Luciuk came across a woman who had been imprisoned at Spirit Lake in Quebec.

“Your campaign shouldn’t be about money,” Luciuk recalled her telling him when the federal government formally apologized for the internment of Japanese Canadians during WWII and provided a settlement, in 1988. “It should be about memory.”

“That, frankly, has inspired me for 25 years,” Luciuk said.

He would go on to spearhead the Ukrainian Canadian Civil Liberties Association’s efforts to get national recognition of the internment camps, which occurred in 2008.

The federal government also created the Canadian First World War Internment Recognition Fund, which financed Project Cto. It has also backed other projects, including Enemy Aliens, a movie by Saskatchewan filmmaker Ryan Boyko, and a book by Kordan.

The association is currently working on teaching packages to encourage more schools to introduce the history of Canadian internment camps into their curriculum.