The remains of 74 more people who died when Malaysian Airlines Flight MH17 was shot down by Russian backed and led separatists in eastern Ukraine last week returned to the Netherlands on Friday. A third solemn ceremony was held, as two military transport planes carried the bodies from Kharkiv, Ukraine to Eindhoven.

2. Russia’s proxy war against Ukraine in Donetsk and Luhansk oblasts

The Active phase of the Anti-Terrorist Operation (ATO) in Luhansk and Donetsk continues.  During the anti-terrorist operation in the east of Ukraine, 325 Ukrainian servicemen have been killed and 1232 wounded stated National Security and Defence Council spokesman A.Lysenko during his briefing. The RNBO reported as of 17:00 Kyiv time, the city of Lysychansk is completely liberated of terrorists, and inspection and demining premises and infrastructure of the city was taking place. Retreating terrorists continue to take firing positions in residential areas of cities, putting civilians at risk. It was further reported that in the city Gorlivka, the gateway to the capital of Donetsk, separatists have installed anti-aircraft installations on the roofs of multi-storey buildings. Today, terrorists kidnapped the chief and another employee of the Ministry of Internal Affairs of the Donetsk Regional State Administration. According to preliminary data, they were transported and held in the premises of the captured SBU building in the Donetsk region.
Today at 13:25, terrorists fired mortars on Ukrainian border checkpoint “Marinivka” on the settlement Dmytrivka.

3. Chairman of Joint Chiefs of Staff compares Putin to Stalin

The Chairman of the Joint Chiefs of Staff Martin Dempsey said Thursday that Russian President Vladimir Putin’s use of Russian military force inside Ukraine harkens back to 1939 when Joseph Stalin led a Russian invasion of Poland. Speaking to the Aspen Security Forum, Dempsey responded to the news U.S. government is accusing the Russian military of firing artillery from Russian territory into eastern Ukraine.

It was reported that a mass grave was found and exhumed in Slovyansk, Donetsk Oblast.

Attached is an info graphic from the Ukrainian government: 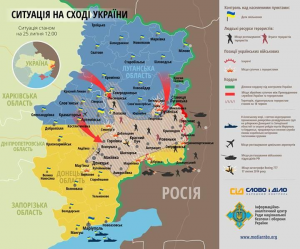