The National Security and Defense Council (RNBO) reported that experts from the commission on investigating the cause of the crash of Flight MH17 stated that according to data from the flight data recorders, the cause of the destruction and downing of the aircraft was a “massive explosive decompression” which occurred due to numerous shrapnel hits from a rocket explosion. The OSCE Special Monitoring Mission reported that their monitors, together with Australian and Dutch experts, were unable to reach the crash site today due to security reasons. They have returned to Donetsk.

2. Russia’s proxy war against Ukraine in Donetsk and Luhansk oblasts

The active phase of the Anti-Terrorism Operation (ATO) in Donetsk and Luhansk continues. The Ministry of Defense reports that ATO forces liberated Savur-Mohyla from control of Kremlin-backed terrorists. Savur-Mohyla is a strategically important highland from which Kremlin-backed terrorists were firing upon Ukrainian forces and several towns, including Marynivka. ATO forces have entered the towns of Shakhtarsk, Torrez and Lutuhine. The RNBO reports that ATO forces are preparing for the liberation of Horlivka, Donetsk oblast. In Horlivka, Kremlin-backed terrorists are using “Grad” systems and mortars to fire into residential areas, leading to civilian casualties. The State Border Service of Ukraine stated that there were mortar and “howitzer” attacks on the border crossing at Dovzhansky, Luhansk oblast, from Chernikov, Russian Federation, from 10AM to 1:05 PM and 1:30 PM to 2:45 PM Kyiv time on 27 July. More than 250 shells were fired; four Ukrainian border guards were killed and two wounded.

3. US releases evidence of shelling of Ukraine from Russia by Russian forces

The United States has released four images that “provide evidence that Russian forces have fired across the border at Ukrainian military forces, and that Russia-backed separatists have used heavy artillery, provided by Russia, in attacks on Ukrainian forces from inside Ukraine.” The images are available at http://photos.state.gov/libraries/ukraine/895/pdf/evidence-russian-firing.pdf. On 27 July, in a phone call between US Secretary of State J. Kerry and Russian Foreign Minister S. Lavrov, Kerry “urged Foreign Minister Lavrov to stop the flow of heavy weapons and rocket and artillery fire from Russia into Ukraine, and to begin to contribute to deescalating the conflict.  He did not accept Foreign Minister Lavrov’s denial that heavy weapons from Russia were contributing to the conflict.”

The UN High Commissioner for Human Rights released a report on the human rights situation in Ukraine. In the accompanying release, the UN stated that “a total breakdown of law and order and a reign of fear and terror have been inflicted by armed groups on the population of eastern Ukraine…The report documents how these armed groups continue to abduct, detain, torture and execute people kept as hostages in order to intimidate and ‘to exercise their power over the population in raw and brutal ways.’ Well organized and well equipped militarily, these groups have intensified their challenge to the Government of Ukraine…” High Commissioner N. Pillay stated that“The horrendous shooting down of the Malaysian Airlines plane on 17 July came just after the cut-off date of this report…This violation of international law, given the prevailing circumstances, may amount to a war crime. It is imperative that a prompt, thorough, effective, independent and impartial investigation be conducted into this event.”The full report is available at http://www.ohchr.org/Documents/Countries/UA/Ukraine_Report_15July2014.pdf

Ukrainian Prime Minister A. Yatseniuk stated that the Cabinet of Ministers will reintroduce changes to the budget and several reform bills to Ukraine’s Parliament. An extraordinary session of Parliament will be held on 31 July. The changes to the budget are necessary to ensure financing of the military; other legislation to be tabled is necessary to ensure IMF financing, reform of the gas sector and other economic measures. President Poroshenko, PM Yatseniuk, speaker O. Turchynov and parliamentary faction leaders met on 25 July. According to the president’s press service “The President once again emphasizes that dissolution of coalition in the Verkhovna Rada shouldn’t paralyze the work of the Parliament and is not a legal ground for resignation of the Cabinet of Ministers. The Head of State counts on further cooperation with Arseniy Yatseniuk and the entire Cabinet of Ministers. Still, it doesn’t exclude personnel reinforcement of the Government’s team. The participants of the meeting share opinion that dissolution of coalition shouldn’t obstruct the adoption of important decisions necessary for the entire Ukraine and every citizen.” 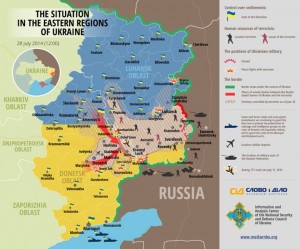