The National Security and Defense Council (RNBO) reported at 12PM that despite the announced ceasefire, mortar shelling and small-arms fire on Ukrainian positions continued. At 5PM Kyiv time the RNBO reported that Kremlin-backed terrorists, taking advantage of the fact that Ukrainian forces are adhering to the ceasefire, surrounded a National Guard checkpoint at Slovyanoserbska from three sides, with 5 T-72 tanks, 4 armored personnel carriers and close to 90 armed terrorists. As of 5PM Kyiv time, the Ukrainian forces are holding their positions. The Press Center of the Anti-Terrorism Operation (ATO) reported at7PM Kyiv time that Ukrainian forces are continuing to unilaterally adhere to the conditions of the ceasefire, but Kremlin-backed terrorists continue to shell and fire upon positions and checkpoints of ATO forces, violating the conditions of the ceasefire near Nyzhnia Krynka, Adviyivka, Popasne, Nikisheno, Mayorsk, Kirovske, Fashchivka. The Donetsk city airport was also shelled from by BM-21 “Grad” (truck-mounted multiple rocket launcher) by Kremlin backed terrorists. The RNBO reported that according to operational information, Russia is massing assault groups of its armed forces in occupied Crimea – in the last weeks at least 64 tanks, nearly 100 armored personnel carriers, several dozen Grad, Urahan and Buk missile systems of the armed forces of the Russian Federation have been concentrated on the Kherson border. The RNBO reported that as of 5PM Kyiv time the situation in Mariupol is calm and under control, despite efforts by Kremlin-backed terrorists to create provocations by firing at checkpoints held by Ukrainian forces.

2. Ukrainian President: Causes  “of casualties among servicemen will be thoroughly studied and analyzed”

Ukrainian President P. Poroshenko stated in a meeting with units of the National Guard, territorial defense and State Border Service that the events leading to numerous casualties among Ukrainian units near Ilovaysk will be “thoroughly studied and analyzed to prevent them in the future.” The Military Prosecution Office is investigating the Ilovaysk case as well as other cases.” Poroshenko stated, “Investigators are examining the way these operations were planned and carried out. We have appointed a military-tactical expertise that will define the legitimacy of decisions and the degree of responsibility of the ATO command staff. Culprits will not avoid punishment.”

Ukraine, Georgia, Romania, Turkey and the United States are taking part in the multinational “Sea Breeze 2014” exercise (8-10 September) in the Black Sea. The US and Ukraine are organizing the annual exercise. 3 NATO ships (Canadian, Spanish and Romanian frigates) are also taking part in the exercise. NATO stated that “The event will test maritime interdiction operations, communications, search and rescue, force protection and navigation.”

4. NANOS poll: 76% of Canadians support Ukraine even if it means jeopardizing trade with Russia 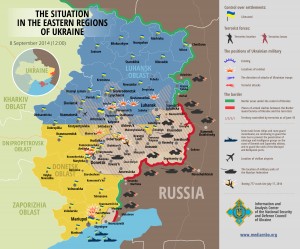