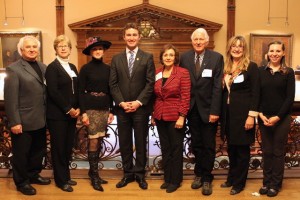 On November 17, 2014, Mr. Yvan Baker, MPP for Etobicoke-Center, invited the Ukrainian Canadian Congress’ National Holodomor Education Committee to join him as special guests in the Ontario Legislature for the start of Holodomor Education Week. During the parliamentary session Mr. Baker commemorated the 81st anniversary of the Holodomor. Mr. Baker eloquently reminded Ontarians that “let us not only remember the victims [of the Holodomor]; let us not only commemorate the victims; let us honour them” (Baker, 2014).

There has been much progress made in Ontario to honour the victims and the survivors of the Holodomor. In 2009, the Holodomor Memorial Act was passed in the Ontario Parliament to ensure that on every third Friday of November, the victims of Stalin’s man-made famine are honoured.

Further progress has been made, as Mr. Baker (2014) pointed out, in terms of educating young Ontarians about the Holodomor in school. Premier Kathleen Wynne and Minister of Education, Liz Sandals, have ensured that the Holodomor will now be a part of the Ontario curriculum. This means that currently high school students who take the mandatory grade ten history and civics courses will be learning about the Holodomor.

In order to ensure that nothing as horrific and tragic as the Holodomor ever occurs again, Mr. Baker, has asked us all to “recommit ourselves to make sure we learn from the mistakes of the past” (Baker, 2014).  Moving forward, let us not forget and let us continue to honour those you died from starvation in the 1932-33 genocide in Ukraine.