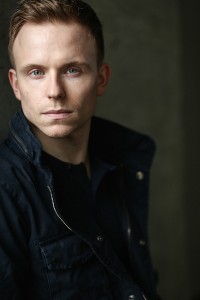 Our February 2015 featured Ukrainian Canadian is Adrian Petriw (AP). Adrian is an up and coming actor whose work includes: film, television, theatre as well as voice work. He has appeared in a number of popular TV shows such as Continuum and Arrow as well as lending his voice to animated series such as Iron Man: Armored Adventures and Hero:108. Michael Hrycak (MH) from the UCC National Office in Ottawa conducted the following interview with Adrian.

MH: Where are you from originally and what was your childhood like growing up?

AP:I was born in Toronto, though my family moved to Vancouver BC when I was 3 years old.  I’m the youngest of 3 brothers, and we were raised in such a way that Ukrainian culture was a part of our daily lives. For example, in the 8th grade, I won the district public speaking contest by giving an 8 minute lecture on the Holodomor… that I wrote myself!

MH: How and when did you get into acting and theatre? What were some of your influences?

AP: As corny as it sounds, I made the decision to be an actor in an instant, one day at 7 years old.  We were at Vanier park in Vancouver after a day of sailing (on my father’s boat, the “Tryzub”), and long story short I managed to finagle us free tickets to Bard on the Beach, after I was discovered sneaking into the actor’s greenroom. I remember sitting in that theatre as The Ghost emerged from upstage with his booming voice, and I thought… “Yup, that’s what I wanna do”.  I’ve worked towards that goal ever since

MH: You have done a variety of work (film, television, theatre and voice work), which is your favourite? What has been your favourite piece of work?

AP: Theatre, Film and Voice Over offer such different experiences for the actor, so it’s hard to say one is my favourite over another.  There is nothing like the energy of performing for a live audience, and I am simultaneously in love with and terrified by the feeling of stepping out on stage, and knowing that I am exposed, and there is no stopping this freight train from leaving.  Film is slower paced, but demands a maddening amount of precision.  It’s like surgery, or defusing a bomb, trying to deliver a truthful performance on screen. Voice Over is play-time. I get to play heroes and creatures I would never be considered for on film.  That’s not to downplay the difficulty of it… Take all of the nuance of a film performance and channel it into the voice, so it can be heard and felt, as opposed to seen.  Take the physical energy and commitment of theatre, but harness it standing on the spot with a mic 6 inches from your face.  My dream come true project-wise was playing Iron Man for two seasons on Marvel’s animated series

MH: Have your Ukrainian roots influenced your career? Have you ever thought of incorporating them into your career?

AP: I have long dreamed of incorporating my heritage into my craft.  Aside from wearing it on my sleeve, which I do literally and figuratively, I want to tell uniquely Ukrainian stories on stage and screen, and bring them to a new audience.  Holodomor, the UPA, Maidan, Shevchenko… These are stories that deserve to be a part of the wider cultural lexicon in North America.

MH: Are there any projects you are working on now or ideas you have in the future?

AP: Unfortunately, I can’t speak publicly about most of my upcoming projects yet, but keep your eyes and ears open for me… I’m always popping up in unexpected places.