Op-Ed by President of the Ukrainian Canadian Congress, Paul Grod

In Support of the TSO

The Toronto Symphony Orchestra was justified – if not morally obliged – in cancelling Ms. Valentina Lisitsa’s performances this week in Toronto.

Weaved throughout Ms. Lisitsa’s Twitter feed are numerous examples of her deeply offensive comments aimed primarily against Ukrainians but also targeting Jews, Poles, visible minorities, and persons with disabilities.  Ms. Lisitsa refers in her social media posts to Ukrainians as “ukropy” (an extremely derogatory ethnic slur against Ukrainians), dog feces and Nazis, and she makes false and spurious allegations that Ukrainians are setting up filtration camps and preparing gas chambers for Russians. These statements fuel Russia’s propaganda machine and serve to provoke ethnic hostilities.

Over the past year Ms. Lisitsa has written many insulting barbs, including a reference to African and Ukrainian traditional clothing as “tribal dress”; made insensitive remarks to Garry Kasparov “that his adorable western democracies enthusiastically deported his [Jewish] people to gas chambers”; and mocked people with Down Syndrome.  Reprehensible comments intended to cause interethnic hostilities are predicated on a foundation of animosity and intolerance.  Individuals who proudly expound bigoted remarks should not be welcome to perform in Canada’s venerable cultural institutions that unite people of all nationalities, religions and ethnicities.

Just as the National Basketball Association was justified in banning LA Clippers owner Donald Sterling for life over racist comments, so too is the TSO justified in cancelling Ms. Lisitsa’s performances.  In fact, all other performing arts centers should follow its leadership.  There should be zero tolerance by arts, sports or other organizations and institutions that serve the public to support performers who make prejudicial remarks or propagate deeply offensive speech targeting people because of their ethnicity.

The magnificent power and beauty inherent in music is that it unites people – people of all walks of life, all nationalities, all religions, all abilities and all ethnicities. It is in this spirit that the Toronto Symphony Orchestra has delivered a message of human accord and harmony to countless audiences.  Ms. Lisitsa’s repugnant comments are divisive and intolerant, and are an affront to our national ethos of respect for all races, religions and cultures.

The TSO is to be commended for their principled stand. 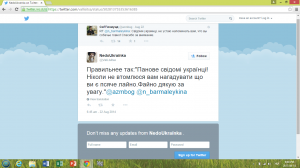 Translation:
This is more correct: “Dear conscious Ukrainians! I will never tire of reminding you that you are dog feces. Good thank you for your attention.