UCC Statement on the Occasion of the 70th Anniversary of Victory in Europe Day08 May 2015
May 4, 2015in Community News 0 Likes 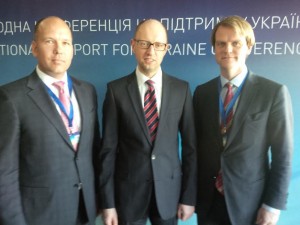 May 4, 2015 – OTTAWA – The Ukrainian Canadian Congress (UCC) welcomes the recent announcement of significant new support provided to Ukraine by the Government of Canada.

On April 28, the Honourable Chris Alexander, Minister of Citizenship and Immigration, announced in Kyiv the “Partnership for Local Economic Development and Governance Project,” valued at up to $19.7 million over six years. Implemented by the Federation of Canadian Municipalities, the “project will promote effective democratic governance and economic development at the local level in four different regions of Ukraine.” The announcement by the Government of Canada can be found at http://www.international.gc.ca/media/dev/news-communiques/2015/04/28b.aspx?lang=eng

During his visit to Ukraine for the International Support for Ukraine Conference, Minister Alexander participated in the transfer of night-vision goggles to Ukraine’s National Guard, part of an $11 million aid package announced in November 2014. Minister Alexander stated, “I am inspired by my trip to Ukraine and by my meetings with brave and courageous Ukrainians who are defending with passion and commitment the values of freedom, democracy and human rights. The Canadian night-vision goggles will strengthen the capability of the Ukrainian Armed Forces and the Ukrainian National Guard in their legitimate fight to defend the sovereignty and territorial integrity of Ukraine.”

On April 30, the Honourable Rob Nicholson, Minister of Foreign Affairs, announced funding for seven projects, to “strengthen human rights, improve access to justice and give support to civil society in Ukraine,” totalling $14 million, including $8 million for an International Organization for Migration project – Combatting Human Trafficking: Children and Youth; $3 million to a UNICEF project – Polio Immunization; $1.6 million to a Ukrainian Helsinki Human Rights Union project – Protecting Human Rights. More information on the announced projects can be found at http://www.international.gc.ca/media/aff/news-communiques/2015/04/29c.aspx?lang=eng

“Having recently joined Minister Alexander in Kyiv at the International Support for Ukraine Conference on April 28, it was abundantly clear by the comments from the Ukrainian Government and other international donor countries that Canada has demonstrated that it continues to be one of Ukraine’s most steadfast allies and dependable friends. The Ukrainian Canadian community thanks the Government of Canada for these most recent announcements of assistance to Ukraine,” stated Paul Grod, National President of the UCC.  “In meeting with most of Ukraine’s senior leadership, it is clear that they are undertaking an ambitious and far-reaching reform agenda as Ukrainians continue to bravely defend their country against the war inflicted on them by the Russian Federation. The additional assistance provided by Canada will play an important role in furthering governance reforms and strengthening civil society.”

On April 30, NATO Supreme Allied Commander Europe Gen. Phillip Breedlove stated, “Today on the ground, the situation is volatile and fragile.  Russian forces used the opportunities provided by the recent lull in fighting to re-set and re-position, while protecting their gains.  Many of their actions are consistent with preparations for another offensive.” The UCC calls on Canada, the USA and their allies to immediately provide defensive weapons to Ukraine’s armed forces and significantly increase sectoral sanctions against the Russian Federation to deter further Russian aggression.