Reuters interviewed Alexander Alexandrov and Yevgeny Yerofeyev, of the 3rd Brigade, Special Forces, Armed Forces of the Russian Federation, who were wounded and captured in a battle in Luhansk oblast earlier this month. They are both in hospital receiving treatment in Kyiv. “Alexandrov stated that he was on active duty with Russian special forces, serving on a three-year contract. ‘I never tore it up, I wrote no resignation request, I was carrying out my orders.’ Reuters reported – “They believe they should be treated as captured servicemen. But Moscow will not admit they are any such thing, or that it has sent any soldiers into Ukraine to help wrest swathes of the east away from [Kyiv’s] control. To do so would undermine Moscow’s claims that the separatist uprising there is a spontaneous reaction by Russian-speaking communities against [Kyiv].” Reuters reported that Alexandrov’s wife has appeared on Russian state television, “Looking nervous, and talking in stilted phrases, she said her husband had quit the Russian military in December last year. That account was helpful to Putin’s claims that only volunteer Russians have gone to Ukraine. ‘They said I was no longer a serviceman,’ Alexandrov said. ‘It’s a bit hurtful, especially when they do it through your family, through your wife. That crosses a line.’ […]Now, both Alexandrov and Yerofeyev are torn. They say they yearn to get home to their families – but they worry about how they can live in a country which, in their view, has disowned them, even though they were prepared to give their lives for it.” The Reuters story is available at: http://www.reuters.com/article/2015/05/29/us-ukraine-crisis-captured-specialreport-idUSKBN0OE0YE20150529

The Russian occupation “authorities” in Crimea, the FSB, opened a criminal case against Refat Chubarov, head of the Mejlis (representative assembly) of the Crimean Tatar People, for “calls to violate the territorial integrity of Russia,” Radio Svoboda reported. Chubarov is banned from travelling to Russian-occupied Crimea. Chubarov stated, “If we follow the ‘logic’ of the FSB, then the next suspects in the criminal case on ‘violating the territorial integrity of Russia’ will be the leaders of over 100 countries that don’t recognize the annexation of Crimea by Russia. I am particularly concerned about Ms. Merkel, who after a recent meeting with Putin, underlined that Crimea remains a part of independent Ukraine.”

Addressing the OSCE Permanent Council on 28 May, US Ambassador D. Baer stated, “We are gravely concerned by the significant increase in fighting in eastern Ukraine. […] Russian-separatist forces are responsible for the overwhelming majority of the ceasefire violations as they attack Ukrainian positions on the Ukrainian side of the line of contact, in clear violation of the Minsk agreements. Each Russian-separatist attack, each new provocation of a defensive response, is a violation that makes a real ceasefire more difficult to attain. […] Russian support for the separatists and active participation continues to fuel the violence in eastern Ukraine. […] Once again, we have evidence that Russia’s aggression has tremendous human costs. […]Residents of areas under control of Russia’s proxies do not have access to medical care, clean water, and food, and children are denied the opportunity to attend school.  […] A peaceful resolution of the violence in eastern Ukraine depends on the full implementation of the Minsk agreements. Russia must fulfill its commitment to cease arming, training and equipping separatists inside Ukraine, withdraw all Russian forces from Ukrainian territory, respect Ukraine’s sovereignty, and end its occupation of Crimea. […] The question remains whether Russia will follow through on its commitments. Should it fail to do so, Russia faces additional costs.” 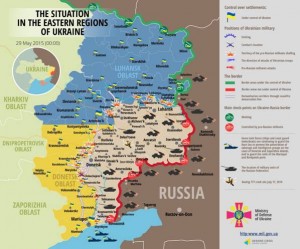