On his third visit to Ukraine, gripped now by fresh and deadly clashes with Russian-backed separatists, Prime Minister Stephen Harper stayed cautious amid calls for Canada to supply weapons to Kyiv even as he sharpened his rhetoric about Russian aggression — saying there is “no point” in a dialogue with Russian President Vladimir Putin, whom Harper accuses of a “Cold War” mindset.

The prime minister’s visit coincides with renewed shelling and casualties on both sides as Ukrainian forces try to hold off rebels who are intent on extending their control in the east of the country.

When Harper met with Ukrainian Prime Minister Arseniy Yatseniuk and President Petro Poroshenko in Kyiv on Saturday, he emphasized the expected arrival in August of 200 Canadian military trainers, although they will be based near the Polish border, 1,300 kilometres from the fighting. The war in the east, though, isn’t waiting. 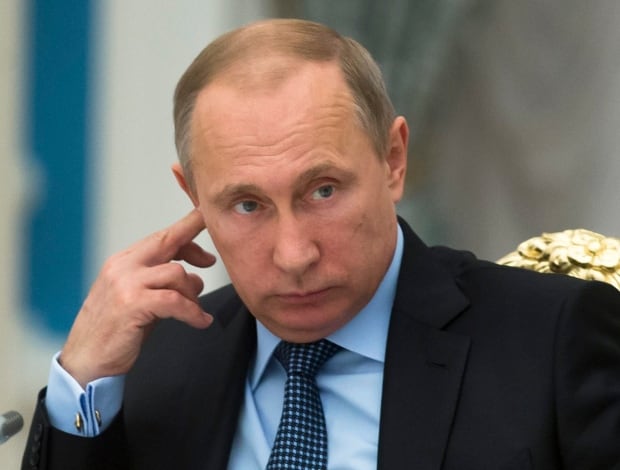 Prime Minister Stephen Harper has said of Russian President Vladimir Putin that he doesn’t think ‘there is any way under this leader Russia will ever change.’ (Pavel Golovkin/Associated Press)

On Friday, a team from the Organization for Security and Co-operation in Europe based in the eastern city of Donetsk that has been monitoring the fighting heard an unprecedented 500 explosions — a new level of intensity that appears to leave the ceasefire agreements reached in Minsk, Belarus, in February in tatters.

“We’ve never seen anything like this,” said Michael Bociurkiw, spokesman for the OSCE team and a Canadian.

The number of refugees displaced by the fighting has reached 1.3 million. More than 6,000 people have died and 15,000 have been injured in 15 months of fighting.

The grinding war and rising prices mean disillusion is setting in among Ukrainians who fought for a democratic revolution.

Protesters were out in force in the famous Madian square in Kyiv on Saturday, calling for the impeachment of Poroshenko.

During his meeting with Yatseniuk on Saturday, Harper offered to send 10 Canadian police officers to help train a new civilian patrol police force in Ukraine. Canada would also outfit members of the new force with uniforms and equipment.

But while thanking Harper politely, Yatseniuk made it plain that his country wants much more: specifically, weapons.

“I appreciate everything the Canadian government is doing for Ukraine,” he said. “We ask our partners to make a bold, strong decision. To support Ukraine with defence, and I want to underline again with defensive weapons. And we expect the globe to realize Russia poses a threat to everyone in this world. We are defending European borders.”

Yatseniuk’s comments echoed earlier comments made by Poroshenko, who on Thursday warned of an imminent “full-scale” Russian invasion.

Poroshenko said there are already 9,000 Russian troops in eastern Ukraine. Western monitors note that the latest bloodshed involves tanks and heavy weapons that were supposed to have been pulled back under the Minsk ceasefire agreements. A front-page headline in the English-language Kyiv Post declared Friday: “Minsk is dead. Now what?” 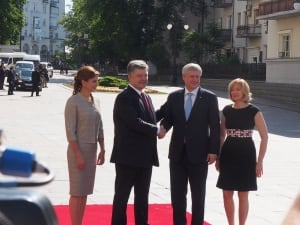 Harper met with Ukrainian President Petro Poroshenko, second from left, in Kyiv on Saturday. The two are pictured here with their wives. (CBC)

After meeting with Poroshenko on Saturday, Harper was cautious. The prime minister did not say no to weapons — merely that, for now, non-lethal equipment is all he’s offering.

“We would only go beyond that in concert with our allies and these are matters that are, obviously, the subject of ongoing dialogue,” Harper said.

Despite the escalating clashes, neither Harper nor the other Western allies seem ready to provide weaponry to the struggling Ukrainian forces — much less direct Western intervention.

Instead, Harper has so far pledged an accelerated training mission, based at Yavoriv in the extreme western end of the country, in addition to more than $400 million in low-interest loans and $200 million in direct aid.

Rhetorically, though, Harper is not holding back. Referring to Putin, he told The Associated Press in an interview before his departure that “the mindset of the guy we’re dealing with is that the Cold War has never ended and ‘I’ve got to fight to change the ending somehow.'”

While in Ukraine, Harper also announced that Canadian negotiators will return to the country June 15 to resume talks to conclude a Canada-Ukraine Free Trade Agreement.

Harper’s European trip — likely his last international tour before the fall election — will take him to four countries in six days.

That means a whirlwind of photo-ops with world leaders, providing rich pickings for the Conservative Party’s campaign ads. With pollsters predicting a tight race, such occasions offer any incumbent a stage that opposition leaders cannot match.

The prime minister, accordingly, is making every minute count. After Ukraine, he will attend the G7 summit in the camera-friendly Bavarian Alps, then spend a day in Poland — still focused on the Russian threat — with a final stop in Italy, where he will meet Pope Francis for the first time.

Conservative strategists hope the trip will resonate with the roughly 40 per cent of Canadians who identify as Catholics, as well as some 980,000 Polish-Canadians and 1.2 million Ukrainian-Canadians. These audiences generally appreciate Harper’s uncompromising rhetoric about the Russian menace — and Harper is giving them plenty of it.

For example, he said Thursday that Russian denials of involvement in Ukraine are simply not credible. “This is kind of typical Russian foreign policy to just say black is white, even though everyone knows the contrary,” Harper told the AP.

“I think as long as that’s the view that they are going to take, that they’re just going to treat us like we are all stupid, there really is no point in having a dialogue with them.”

Harper leaves Kyiv Saturday night to attend the G7 summit at the luxury alpine resort of Schloss Elmau, south of Munich, where the Western response to developments in Ukraine will top the agenda.

Chairing the meeting is its host, German Chancellor Angela Merkel, a Russian speaker who is closest to the Russian president among the Western leaders.

U.S. President Barack Obama, arriving Sunday, is urging European leaders to maintain strict sanctions on the Putin government. Harper told the AP that there was no way Russia would be readmitted to the elite G7 group with Putin in power.

“I don’t think Russia under Vladimir Putin belongs in the G7. Period,” he said. “It would require consensus to bring Russia back and that consensus will just not happen.”