Canada stands among Ukraine’s greatest friends. Why Canada? It says as much about the challenges that Ukraine faces internationally as it does about the leadership of the Canadian government. 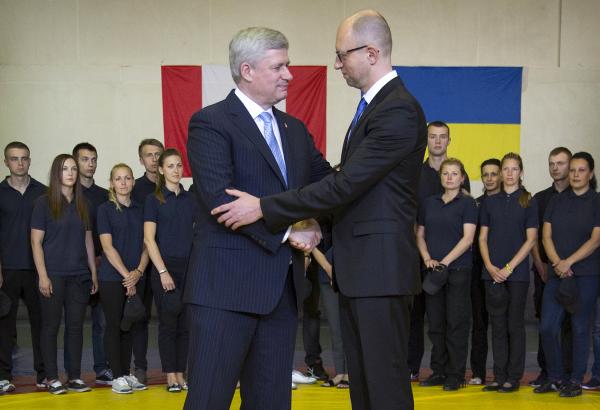 In Ukraine last week, Prime Minister Stephen Harper shakes hands with Arseniy Yatsenyuk, prime minister of Ukraine, at a police academy of the Ministry of Interior.

“We cannot let Mr. Putin’s dark and dangerous actions stand, for they have global security implications. And because, as I have said before, for Canadians, with our deep connections to the Ukrainian people, this is not to us just a matter of international law or political principle; this is a matter of kinship, this is a matter of family, this is personal and we will stand by you.”

As Prime Minister Stephen Harper arrived last weekend for his third official visit to Ukraine in the past year and a half in advance of the G7 Summit in Germany, he was acknowledged as the leader of Ukraine’s staunchest international champion. On multiple occasions, Canada has demonstrated its willingness to stand shoulder to shoulder with the people of Ukraine as they stood up to the corrupt and autocratic regime of Viktor Yanukovych and today as they face down an external aggressor, Putin’s Russian Federation.

In international forums such as the UN, the G7 and NATO, as well as in bilateral decisions related to providing Ukraine with military trainers, Canada has consistently and meaningfully demonstrated its support for Ukraine’s right to sovereignty, territorial integrity and to ensure the security of its citizens.

But Prime Minister Harper’s visit to Ukraine poses the question: Why Canada? Canada’s economic ties to Ukraine are not significantly different than those of many other countries. The Ukrainian community in Canada is not so dramatically better organized in Canada than in other countries.

The reality is that Canada’s leadership as Ukraine’s greatest supporter says as much about the challenges that Ukraine faces internationally as it does about the principled and exemplary leadership that the government of Canada, together with the unanimous support of all parliamentarians, has provided since the crisis in Ukraine began.

As we move forward, securing Canada’s support for Ukraine in the face of continued Russian aggression will not be enough. Canada, together with the government of Ukraine, must find effective ways to secure increased support for Ukraine in the United States, Europe, Asia and around the world. This is true as we witness Russian efforts to implement a 20th-century notion of a sphere of influence in the countries of the former Soviet Union, violations of territorial integrity of neighbouring states and unilateral changes to the post-Second World War international security framework.

Canada’s approach to Ukraine is grounded in the basic premise that most people here know very little about Ukraine, yet are repulsed by Russia’s invasion of Ukraine, and care enough about the difficult challenges that Ukraine faces at the hands of an aggressive irredentist neighbour to express concern. Why is this the case?

For 125 years, Canada and Ukraine have had a special relationship based on familial ties, shared values and a commitment to a better future. Canadian values are Ukrainian values. Many Ukrainians came to Canada seeking freedom and to escape successive oppressive occupying regimes. They helped to build Canada and make it what it is today.

Since Ukraine’s independence from the Soviet Union in 1991, the Ukrainian-Canadian community in Canada has worked tirelessly to help Ukrainians recover from their difficult recent past, having suffered oppression and death at the hands of both Nazi and Communist totalitarian regimes. We have found that Ukraine and Ukrainians are fundamentally like Canadians: caring about health care, education and a better life for their children and grandchildren. Above all, having known war, they value peace.

In fact, Ukraine willingly relinquished in 1994, with the signing of the Budapest Memorandum, the world’s third-largest nuclear arsenal in exchange for security assurances from the United States, the United Kingdom and the Russian Federation, which vowed that Ukraine’s sovereignty and borders are inviolable. This agreement continued to hold until last year’s illegal invasion and occupation of Crimea, and destabilization and invasion of eastern Ukraine by the Russian Federation.

In this framework, support for Ukraine and her long search for a European future, economic prosperity and peace also means supporting Ukraine in her time of need. Thousands of regular and irregular Russian forces are in Ukraine and tens of thousands more are at her doorstep. In attacking Ukraine and continuously violating the Minsk I and now the Minsk II ceasefire agreements, Russia and the terrorists it supports present the most serious threat to global security since the end of the Cold War. Canada has taken a principled position supporting Ukraine’s government with non-lethal military equipment, military training as well as humanitarian and medical aid.

It is thanks to this principled approach, that all Canadian political parties express solid support for the core premise that Ukraine has the right to exist in safety and security within internationally recognized borders and without the threat of further belligerence from Putin’s Russia.

There is only a small minority in Canada that mistakenly thinks that Putin can be engaged and appeased and that sacrificing Ukraine’s interests to Putin’s folly will assure “peace for our time.” Sadly, this small minority ignores the painful lessons of the 20th century. The vast majority of Canadians know that the people of Ukraine have a right to live freely and choose their own destiny without Russian interference or meddling in their internal affairs.

The government of Canada’s policy has become the barometer for constructive support for Ukraine and it is this broad-based, non-partisan support that we believe allows Canada to be a leader on the world stage and at the G7.

On the occasion of Prime Minister Harper’s visit to Ukraine, the Ukrainian-Canadian community expresses its deep gratitude for our government’s leadership and steadfast friendship for Ukraine.

Today, Canada stands among Ukraine’s greatest friends, something deeply cherished by the people of Ukraine.

Paul Grod is President of the Ukrainian Canadian Congress.