Grains of Wheat and the Maple Leaf

As a country largely shaped by the experiences, backgrounds, and contributions of the members of its population, Canada owes much to the countless groups of people who immigrated to its lands over the past decades and centuries. Ukrainians, one such ethnocultural group, have established a strong presence in Canada which has given birth to a particular identity: Ukrainian Canadian. This population has persevered, evolved, and progressed over the years, and in so doing, has made a distinctive mark on Canadian society. For diverse reasons ranging from resilience in the face of discrimination to a will for cultural preservation, Ukrainian Canadians have succeeded, both collectively and individually, to project their voices across the country.

When Ukraine briefly gained independence in 1918, members of the Ukrainian diaspora across the world celebrated their ancestral country’s newfound status. Passion and pride in the land of their heritage motivated Ukrainian Canadians to express their sentiments to diplomats and to the Canadian government, in the hopes of persuading the Allied Powers to recognize the Ukrainian National Republic. Although their admirable efforts did not return much success, the strong will of the Ukrainian Canadians in these matters was not futile. They proved that they could, collectively as a population, work toward a common goal, ensure their views reached an intended audience, and establish a powerful and valuable presence in Canada. This perseverance has lasted and Ukrainian Canadians continue to influence Canada politically today. All of the political advocacy, passion, and work of Ukrainian Canadians, from their initial involvement in Prairie municipal politics to their current efforts against war in Ukraine, combine to demonstrate that this population has a strong influence and an important role in Canada.

When Ukrainians immigrated to this country, they brought with them the artistic traditions and consciousness of their homeland. Traditional Ukrainian art and Canada have reciprocally influenced each other, causing the development of unique Ukrainian Canadian artistic styles which speak to all Canadians. For instance, Ukrainian dance is a vibrant, dynamic, rich art form that possesses strong roots in Canada. Numerous Ukrainian dance ensembles based in cities across the country perform to diverse crowds at diverse events, many of which are not even affiliated with Ukraine or Ukrainian Canadians. Despite its connection to a particular Canadian ethnocultural minority, Ukrainian dance speaks to members of the general Canadian society regardless of their heritage. It enhances Canadians’ appreciation of cultures, traditions, and practices other than their own.

Over the span of their 124-year existence, Ukrainian Canadians have profoundly impacted Canada. Although perhaps a bit timid at first, this group has grown in confidence, strength, and pride to go on to significantly contribute to many aspects of this country. However, this influence does not only exist in the past – it continues today, enriching, educating, and enhancing life in Canada across all cultural backgrounds. This population embodies and enacts the richness arising out of the duality of its Ukrainian Canadian identity: the merging of the strength and endurance evoked by Ukrainian wheat with the collaboration and freedom symbolized by the Canadian maple leaf has proven endlessly beneficial to Canada. 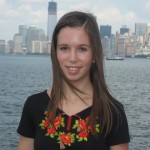 Solomiya is a second-year communications student at the University of Ottawa and is involved with several Ukrainian Canadian organizations. She teaches and performs with the Svitanok Ukrainian Dance Society, and is an Executive member of the uOttawa Ukrainian Students’ Club and secretary of the Capital Ukrainian Festival. Solomiya is passionate about her Ukrainian heritage and about sharing in it with others.