2. IMF: If deal between Ukraine and private creditors not reached, IMF can lend to Ukraine under Lending-into-Arrears policy

C. Lagarde, Managing Director of the IMF, stated in a letter to members of the financial community on 12 June, “The Ukrainian authorities have embarked on an ambitious economic program for 2015-18 aiming at deep-reaching macroeconomic adjustment and structural reforms. It includes a substantial fiscal consolidation and energy sector reforms, the rehabilitation of the banking system, the build-up of the National Bank of Ukraine’s (NBU) international reserves to prudent levels, and the improvement of the business environment to enhance the productive potential of the economy. […]Ultimately, Ukraine’s debt repayment capacity is limited by its fiscal capacity. Rapid completion of the debt operation with high participation is vital for the success of the program, since Ukraine lacks the resources under the program to fully service its debts on the original terms. The IMF, in general, encourages voluntary pre-emptive agreements in debt restructurings, but in the event that a negotiated settlement with private creditors is not reached and the country determines that it cannot service its debt, the Fund can lend to Ukraine consistent with its Lending-into-Arrears Policy. The Ukrainian authorities are fully cognizant of the large challenges ahead-including substantial macroeconomic risks stemming from the unresolved conflict in the East–and have reaffirmed their steadfast determination to tackle economic imbalances that held Ukraine back in the past, and deepen structural reforms in order to achieve robust and sustainable growth. I believe that their program warrants the support of the international community, including the private sector, which is indispensable for the success of this program.”

The Government of Ukraine and the Japan International Cooperation Agency signed a loan agreement for the “Bortnychi Sewage Treatment Plant Modernization Project.” Ukraine’s Ministry of Finance stated, “Through the development and modernization of the facilities at the Bortnychi Sewage Treatment Plant, the project will improve sewage treatment in Kyiv city and contribute to the improvement of public health and living conditions of its citizens. […]The loan will be allocated for the construction and renovation of wastewater treatment facilities, sludge treatment facilities, sludge incinerators, as well as expert consultant services.” The loan agreement is for approximately $870 million, at an interest rate of 0.1%/year for 40 years, with a 10-year grace period.

At a meeting of the OSCE Permanent Council on 11 June, US Permanent Representative to the OSCE D. Baer stated in response to the Chief of the OSCE border observation mission,”Your team continues to observe vehicles carrying coffins crossing into Russia, as well as vehicles entering Russia marked with ‘Cargo 200,’ a Russian military term used for personnel killed in action. These and other observations from your mission point clearly to Russia’s aggression and destabilizing actions in eastern Ukraine. […]The mandate of the Mission remains highly restricted and woefully inadequate. As we approach the expiration of the Observer Mission’s current mandate on June 30, a full discussion on its renewal and expansion is needed. […]As the EU, Canada, Turkey, Ukraine, and others have already made clear, an expansion of the mission along the entire border is required to support efforts toward peace. We remind the Permanent Council that the current mandate limits observations to exactly two pinpoints along the international Russian-Ukrainian border, as combined Russian-separatist forces ensure that the rest of the border along the conflict zone remains off limits to the international community and Ukrainian authorities. Let us also not forget that combined Russian-separatist forces are also systematically denying the Special Monitoring Mission access to the Ukrainian side of the border. Russia often calls for the full implementation of the Minsk agreements. Russia should heed its own calls, and cease resistance to full international monitoring of the international border, and full inspection by international organizations of anything crossing the border. Mr. Chair, we remain concerned by the Observer Mission’s restricted access within the Gukovo checkpoint, where observers are confined to a small patch of ground. We also understand that Russian authorities will not allow citizens of certain OSCE participating States to take part in the Observer Mission.” 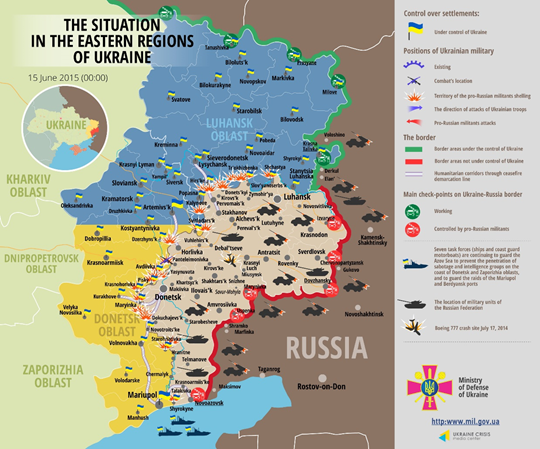