The National Security and Defense Council of Ukraine reported at 12:30 PM Kyiv time that near Mariupol, Russian-terrorist forces fired on Ukrainian positions at Mykolaivka, Starohnativka and Chermalyk with mortars, howitzers and small arms. Towards Donetsk, Russian-terrorist forces fired on Ukrainian positions at the Avdiyivka-Maryinka line with heavy weapons. Towards Luhansk, clashes and firefights with Russian terrorist forces took place at Stanytsia Luhanska and Shchastya. The Ministry of Internal Affairs reported that on 4 July, Kremlin-backed terrorists shelled Shchastya with mortars, injuring two civilians. The RNBO reported that in the last 24 hours no Ukrainian soldiers were killed and three were wounded. The press-center of the anti-terrorism operation (ATO) reported at 8 PM Kyiv time that Ukrainian forces repelled two attacks by Russian-terrorist forces at Bohdanivka, near Mariupol. The attacks lasted from 5:50–7:30 PM Kyiv time.

M. Polozov, Nadiya Savchenko’s attorney, stated that Russia has denied the defense’s petition for a jury trial in the fabricated criminal case against her, Radio Free Europe/Radio Liberty (RFE/RL) reported. Last week Savchenko’s defense team stated that a preliminary hearing in her trial may be held in late July or early August. Savchenko, a Ukrainian air force pilot and MP, was serving in eastern Ukraine, when abducted by Kremlin-backed terrorists in June 2014 and taken to Russia, where she has been illegally detained and imprisoned since that time. Russia has ignored repeated calls from the international community for her immediate release.

On 4 July, approximately 2000 Kyiv policemen and policewomen were sworn in and began work patrolling the streets of Kyiv. Canada, the US, Japan, Australia and other countries supported the reform of the police force. On 3 July at the Graduation ceremony of the new police officers, Canada’s Ambassador to Ukraine, R. Waschuk, stated, “This is a complete replacement of personnel, complete replacement of techniques, equipment […] So I’m confident that this is a genuine new start.” The next cities scheduled to launch new police patrol forces are Lviv, Kharkiv, and Odesa.

5. Ukraine obtains right for duty-free export to US of about 5000 products

On 3 July, the Cabinet of Ministers of Ukraine stated that Ukrainian companies, from the end of July, will have the right to export about 5000 types of products to the US duty-free, under the Generalized System of Preferences (GSP) – including large numbers of chemicals and minerals, and certain agriculture and fishing products.

The European Bank for Reconstruction and Development (EBRD) stated that it is considering taking a significant minority stake in Raiffeisen Bank International, Ukraine’s second-largest Western-owned bank, Reuters reported. The proposed investment “will send a strong positive signal to the market during the period of severe political and economic crisis in Ukraine,” Reuters reported the EBRD as stating.

The Trilateral Contact Group (Ukraine-OSCE-Russia) will meet in Minsk on 7 July to discuss the implementation of the Minsk agreements, former President and Ukraine’s representative to the Group, L. Kuchma’s press secretary stated, Radio Svoboda reported. 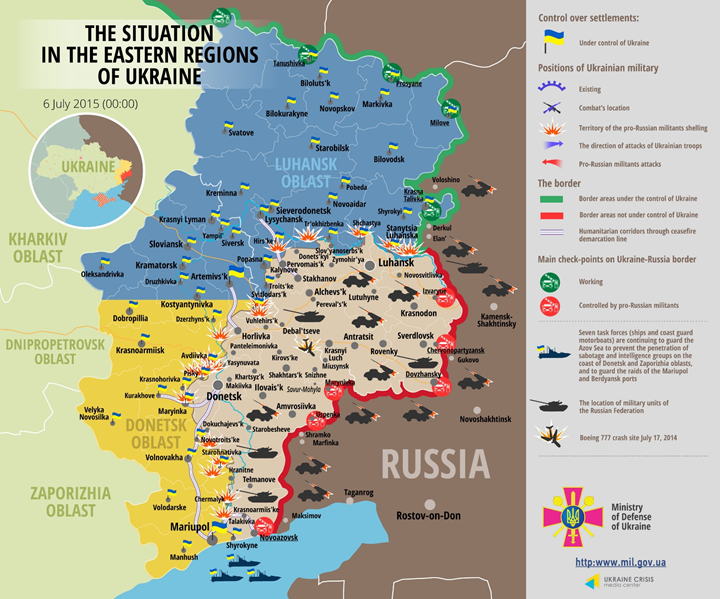