The National Security and Defense Council of Ukraine (RNBO) reported that the situation in the area of the Anti-terrorist Operation(ATO) in the Luhansk sector remains calm. ATO Spokesman Oleksandr Motuzyanyk noted that Russian terrorists engaged in mortar fire on ATO forces in Krymske and fired on Ukrainian forces with small arms and grenade launchers in Stanytsya Luhanska, Shchastya and Zolote. “Ukrainian border guards shot down a Russian-produced UAV. The pilotless aircraft was conducting reconnaissance on the front near Herasymivka near Stanytsya Luhanska,” said Col. Motuzyanyk. Russian terrorists continue mortar and artillery fire on Ukrainian positions near Svitlodarsk. The situation is most dire in the area of Novhorodske, where the Russian terrorists fired upon ATO forces using 122-mm cannons. “Two thirds of all the ceasefire violations committed by the enemy took place in the area between Avdiyivka to Maryinka. Ukrainian forces are holding the line despite the enemy’s intense shelling, so the frontline remains firm. There were at least three reported cases of civilians being injured in artillery fire committed by the enemy. In addition, in Mariupol sector the ceasefire is generally holding. There were only two brief armed provocations committed by militants in Shyrokyne. Ukrainian Armed Forces incurred no losses in action over the last twenty-four hours, though seven Ukrainian servicemen were wounded.

The OSCE Special Monitoring Mission recorded via its Unmanned Aerial Vehicle (UAV) eleven tanks, thirty-one armored personnel carriers and four 122-mm artillery mounts, as well as at least thirty-one military trucks in the vicinity of Bezimenne, occupied by the so-called Donetsk People’s Republic (DPR). The village is 10 km from the demarcation line. This information was provided by Colonel Oleksandr Motuzyanyk, Spokesperson of the Administration of the President of Ukraine on ATO-related issues, at a press briefing at Ukraine Crisis Media Center.

Ukraine President P Poroshenko discussed prospects for cooperation with Supreme Allied Commander P Breedlove. President Poroshenko met with General Breedlove and discussed the situation in Ukraine. President Poroshenko told General Breedlove about the current situation in Donbas and stressed that Ukraine remains committed to the full implementation of the Minsk agreements and insists on their proper implementation by all parties. Poroshenko expressed his appreciation and gratitude for the support and assistance of the US and NATO in strengthening the defence capabilities of Ukraine. “It is an extremely important issue for us when dealing with the annexation of the Crimea and aggression in Donbas,” Poroshenko said.

The President emphasized the value of joint military exercises, and expressed Ukraine’s interest in further cooperation in the defence sector, including expanding joint training programs to strengthen Ukraine’s army. General Breedlove emphasized the need for continued reformation of the Ministry of Defence.

The Pentagon is moving toward providing Ukraine with bigger, longer-range radar to help it counter artillery being used by Russian terrorists. Ukraine’s military “would benefit from having more counter-battery radar as well as more capable radar,” said a senior Obama administration official. Providing the counter-battery radar—which uses the trajectory of an incoming projectile to determine where it was fired from—would meet a request of Ukrainian leaders for capabilities to look deeper into Russian terrorist-held territory, and to more accurately fire back. Ukrainian officials say their soldiers are being killed or injured every day by artillery fired from artillery pieces provided by Russia and manned by Russians. The U.S. has already provided Ukraine with 20 lightweight counter-mortar radar units, with another 10 due to be transferred by the end of this year, officials said. Those units have a range only of about 6 miles. The U.S. Army is now looking to provide what is known as AN/TPQ-36 and 37 Firefinder radar to Ukraine, with ranges of between 15 and 31 miles. Pentagon officials said they were already seeking available units and laying the groundwork to start shipping them, pending a White House decision.  “From a military perspective, I think it’s reasonable that we provide that support to the Ukrainians, and frankly without that kind of support, then they’re not going to be able to protect themselves against Russian aggression,” Gen. Dunford said. The longer-range radar could allow a more robust defense by Ukrainian forces.

Russia’s 33rd ‘aid convoy’ of more than 100 trucks has crossed into eastern Ukraine in the early hours of July 23. Ukrainian military says the arrival of the ‘aid’ coincides with upsurges in attacks on Ukrainian positions along the front line in the following days. Russia does not allow inspections of the vehicles to be performed by Ukrainian border guards, members of the OSCE, or International Red Cross workers. Russia sends its military convoys into Ukraine without permission from the Ukrainian government. The trucks never cross the border via a Ukrainian-controlled checkpoint, and only visit the parts of Ukraine where Russian terrorists have seized control.

The Chairman of the Committee on Foreign Affairs of the European Parliament, Elmar Brok, announced the continuation of EU sanctions against Russia in case it fails to fulfill the Minsk agreements and continues the policy of aggression Brok said during a speech at the German Marshall Fund on the eve of his upcoming visit to Ukraine, reports Radio Svoboda. “We are to maintain sanctions until the implementation of Minsk agreements, but if the Russian aggression continues, there will be more sanctions,” said Brok. “Sanctions is the only option to peacefully convey to the aggressor the message that he has to pay an expensive price for the aggression.”

France and Ukraine have condemned a visit to Crimea by a group of French MPs in defiance of Western sanctions imposed against Russia after Russia attacked and illegally occupied Crimea in March 2014. The peninsula is legally part of Ukraine. 11 Republican Party MPs arrived in Crimea on Thursday, a move the French Foreign Ministry said was a “violation of international law”. Ukraine called the MPs “irresponsible”. 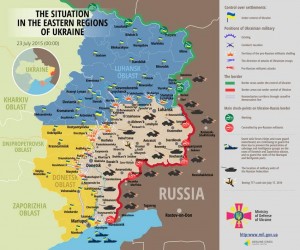