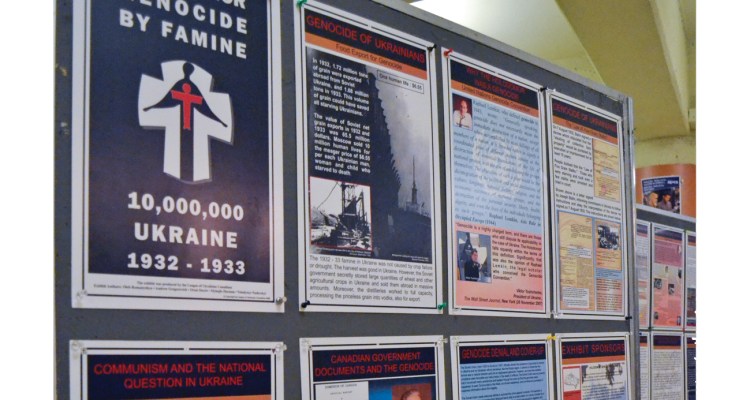 The University of Ottawa Ukrainian Students’ Club (SUSK Ottawa) hosted an event in the Alumni Auditorium on Nov. 24, featuring a historical exhibit, speakers, and a documentary film to commemorate the Ukrainian famine-genocide of 1932-33, called the Holodomor.

The students in SUSK Ottawa felt that the commemoration was important to remember the millions of victims of the man-made famine, and to spread awareness of it on campus.

For all the loss of life, the Holodomor was only recognized as a genocide against the Ukrainian people in 2006.

Julia Zubrytska, a law student at the U of O and member of SUSK Ottawa, says this recognition was largely due to the work of many Canadian professors and Manitoba-born MP James Bezan, who was honoured by SUSK Ottawa at last year’s commemoration event.

During the first of his “Five Year Plans” Joseph Stalin, then leader of the Soviet Union, began the collectivization of all private property with an emphasis on mass industrial revolution and militarization. To feed the workers of this growing industry, he turned to Ukraine’s abundant wheat fields. He began a forced starvation which killed upwards of 25,000 people a day, yet the Soviet government always denied such a thing had ever happened.

There have been many big pushes to raise national awareness of the Holodomor, which feels especially poignant given the current political atmosphere between Ukraine and Russia. Canada is home to over 1.2-million Ukrainian-Canadians, the third-largest Ukrainian population behind Russia and the Ukraine itself, so many Canadians have a direct connection to victims.

This year’s memorial event featured the 2005 film Holodomor: Technology of Genocide depicting images of the Holodomor, and included heartbreaking testimonials from survivors. There was also an historical exhibit in memory of the lives lost.

“Canadian professor Taras Kuzio stated that the Holodomor targeted Ukrainian national identity,” says Zubrytska. “It was against the cultural issues, like wearing embroidered shirts, the Ukrainian language. A lot of people now don’t speak Ukrainian, they try to speak Russian.”

For SUSK Ottawa, hosting an event on campus for the Holodomor genocide is also very personal, as many of them, including Zubrytska, have family members who are survivors of the Holodomor.

The Holodomor is now remembered around the world, normally in the last week of November, and SUSK Ottawa holds an annual event on campus. Zubrytska would like to encourage more people to join in the event next year to ensure that the victims of the famine-genocide will not be forgotten.