Today at the Provincial Legislative Building in Winnipeg, Manitoba Premier Greg Selinger along with Ukrainian Canadian Congress – Manitoba Provincial Council (UCC-MPC) President Oksana Bondarchuk and Hon. David Chomiak announced that the Province of Manitoba is donating three ambulances for humanitarian Ambulances for Ukraine project. UCC-MPC is donating funds to cover the costs of a fourth ambulance.
“The Ukrainian Canadian community in Manitoba is grateful to the Province for making this donation of important medical equipment to Ukraine. In a short time, these vehicles will be in Ukraine, transporting wounded servicemen and injured civilians from the conflict zone so that they can receive treatment.” said UCC-MPC President Oksana Bondarchuk. “We are extremely happy that because of the generosity of Manitobans of all backgrounds, UCC-MPC had funds in place which allowed us make a contribution of one ambulance to the project. It is symbolic that this announcement is coming just before January 7th which is Ukrainian Christmas,” added Oksana Bondarchuk.
More information on today’s announcement from the Province of Manitoba can be found below.
To read the CBC News piece on the event, click here.
The Winnipeg Free Press article can be read here. 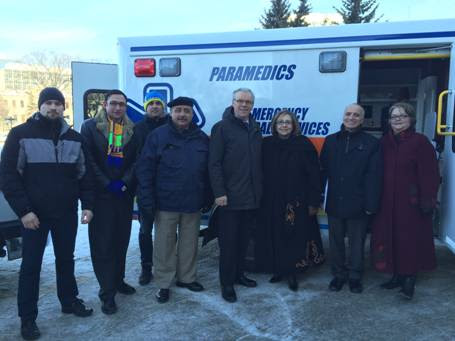 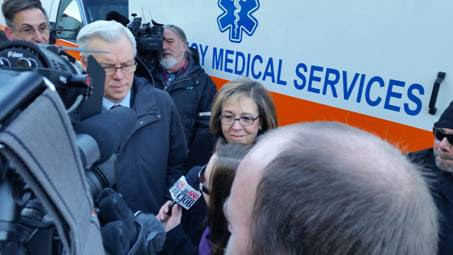 PROVINCE TO DONATE AMBULANCES TO UKRAINE

The Manitoba government will donate three ambulances to the humanitarian Ambulances for Ukraine project, Premier Greg Selinger announced today.
“Manitobans have a special bond with the people of Ukraine and we stand with them during this crisis and in their time of need,” said Premier Selinger.  “The ambulance project is a practical way Canadians, and in particular, the Ukrainian Canadian community, can help.”
The premier added the Ukrainian Canadian Congress – Manitoba Provincial Council is contributing a fourth ambulance to the project.  The ambulances are less than eight years old and have had recent safety inspections.  The province is investing approximately $40,000 to make any needed repairs to ensure the ambulances are roadworthy and reliable when put into service in Ukraine.
“We are grateful to the government and people of Manitoba for their generous gift of three ambulances, which will be used to save lives in Ukraine,” said Paul Grod, national president, Ukrainian Canadian Congress.  “Manitobans continue to be generous in their support of the people of Ukraine – two years ago as they fought for human dignity against an authoritarian president and today as they defend their families from Russia’s invasion and ongoing war against the Ukrainian people.”
The premier noted the Ambulances for Ukraine project will deploy this equipment to front-line medical and health-care workers in Ukraine.
“The Ambulances for Ukraine project was one of the first priority projects featured by the Ukraine Appeal, an initiative to focus the support of the Ukrainian Canadian community on the critical needs in Ukraine,” said John Holuk, project manager, Ambulances for Ukraine project, and member, co-ordinating council, Ukrainian Canadian Congress Ukraine Appeal.  “While the first phase of the project was focused on providing care to the numerous victims of the conflict in the east, the second phase will expand the focus to meet the needs highlighted by the United Nations and World Health Organization where the continuing conflict has deprived many communities access to basic medical care.”
Ambulances previously donated by emergency services in Saskatchewan and Alberta have been delivered to hospitals treating the wounded from conflict zones and have already made more than 100 trips to care for or transfer the wounded, the premier noted.
“There are many close ties between Manitoba and Ukraine, and I’m pleased we’re able to provide help and support to people living in the conflict area,” said the premier.
In August 2015, the province announced it would invest more than $6.2 million to purchase 52 replacement ambulances in the province to ensure the comfort and safety of patients.
0 Likes