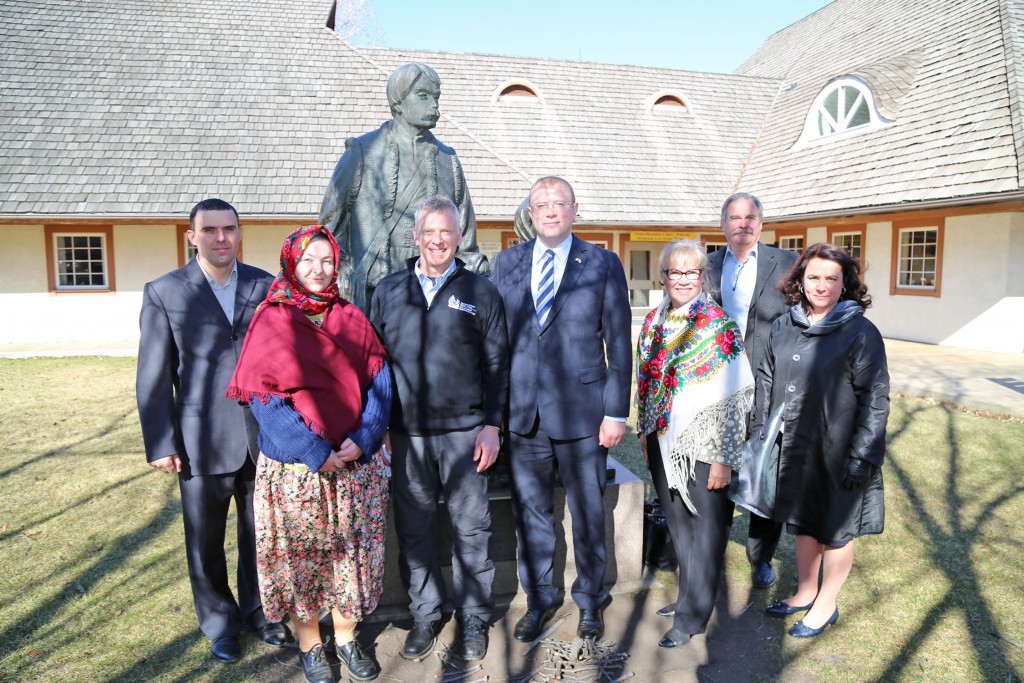 Ambassador Shevchenko visited the Ukrainian Cultural Heritage village, where he was introduced to the way the first settlers from Ukraine built their homesteads. Ambassador Shevchenko then met with representatives of the Canadian Institute of Ukrainian Studies (CIUS) at the University of Alberta, including the Director of CIUS, Dr. Volodymyr Kravchenko. 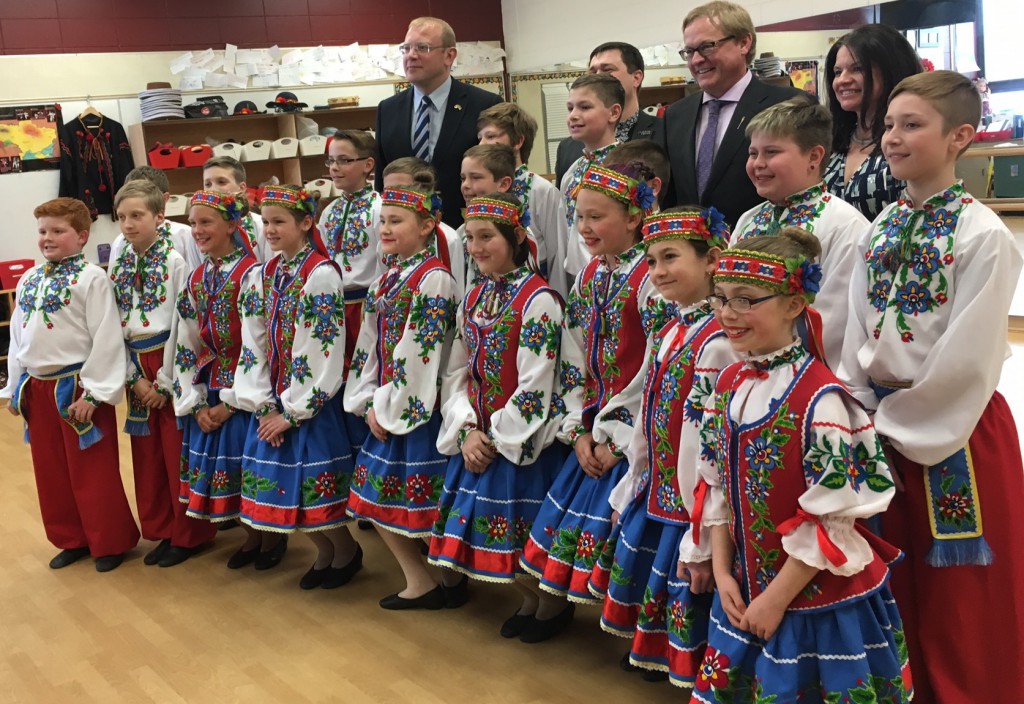 On April 16, Ambassador Shevchenko and Paul Grod visited the Ukrainian Canadian Archives and Museum of Alberta, together with Randy Boissonnault (MP – Edmonton Centre). They then met with Garnett Genuis (MP – Sherwood Park-Fort Saskatchewan), followed by a meeting with Kerry Diotte (MP – Edmonton Griesbach). In the afternoon, Ambassador Shevchenko and Paul Grod visited the Alberta Council for the Ukrainian Arts (ACUA) Gallery and attended the first North American Ukrainian Bridal Fair organized by ACUA. 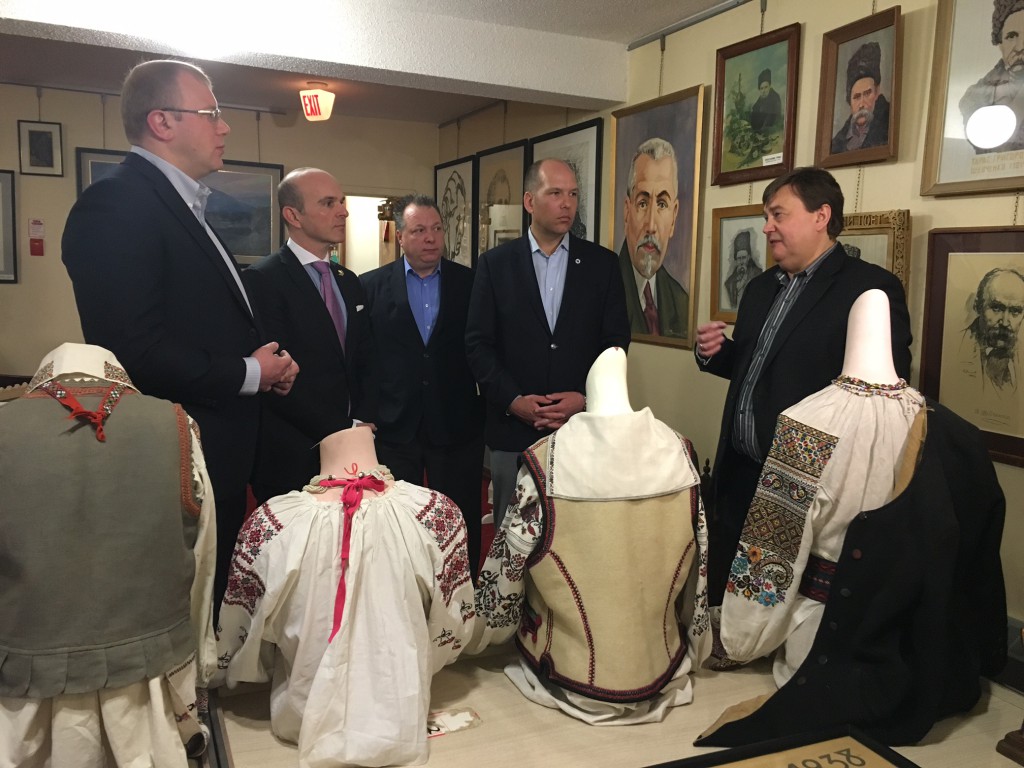 In the evening the UCC: 75 Years Strong Gala was held at the Oasis Centre. Greetings from Government of Canada were brought by Randy Boissonnault, MP, the Alberta Government – by the Hon. Deron Bilous,  Minister of Economic Development and Trade and from Mayor  Don Iveson. Olesia Luciw-Andryjowycz, President of the Alberta Provincial Council of the UCC, brought greetings on behalf of the UCC-APC. The Axios Choir, Ruta Ensemble and the Cheremosh Dance Ensemble treated the attendees to wonderful performances. Ambassador Shevchenko and Paul Grod offered interesting and timely remarks to the gathering. 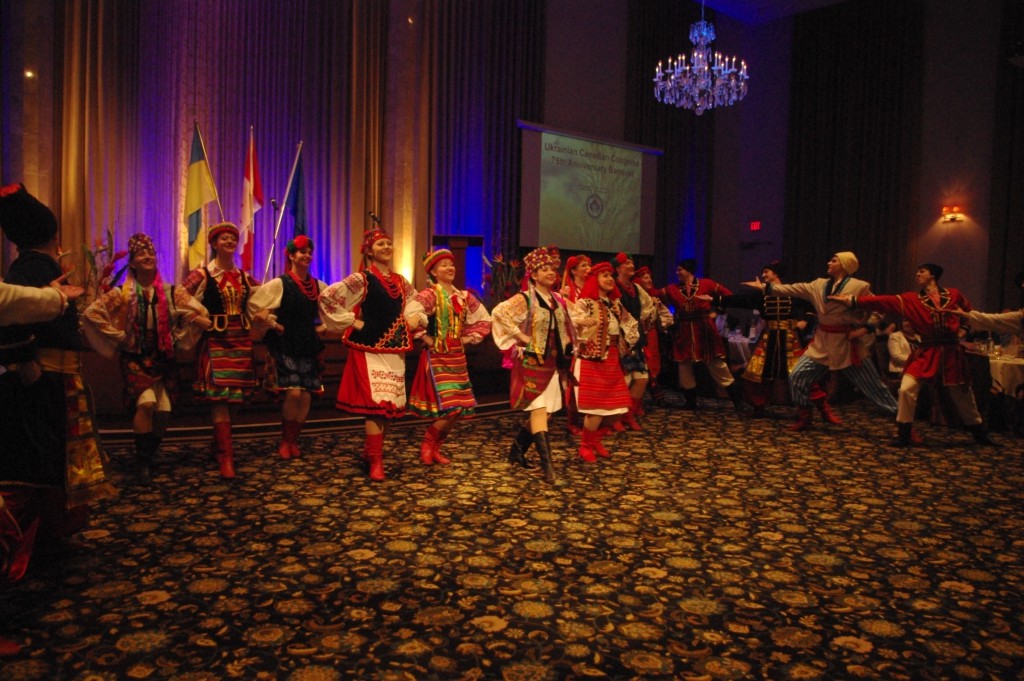 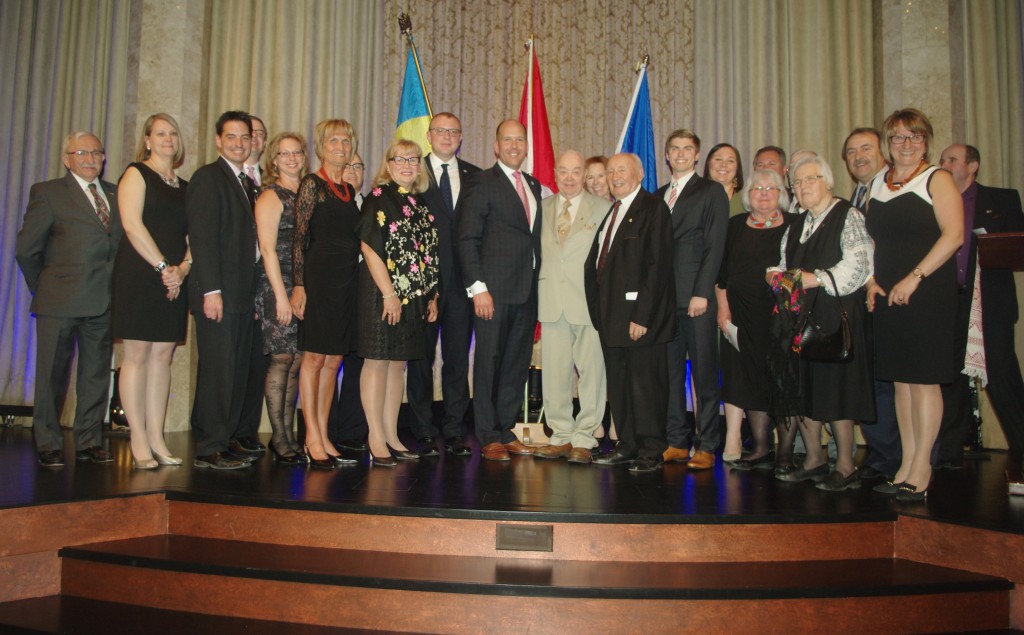 In the morning of April 17, Ambassador Shevchenko and Grod attended the Children for Peace Run in Rundle Park, in support of the UCC Ukraine Appeal: Alberta initiative to bring children of Ukrainian war veterans to Edmonton for summer camp. The Ambassador and Grod presented medals to the winners of the run.

That afternoon in Red Deer, a UCC-APC affiliate branch community meeting was held at the St. Volodymyr Ukrainian Catholic Church. A lively and engaging discussion took place between the attendees and Ambassador Shevchenko and Grod. 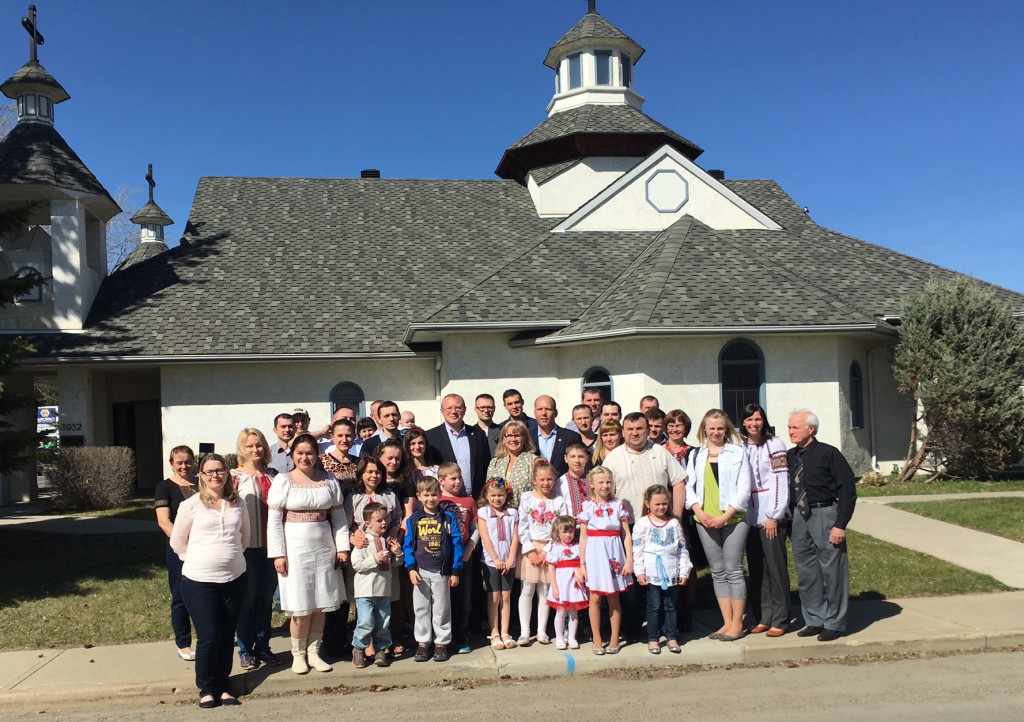 On the evening of April 17, a reception was held at Elks Lodge and Golf Course in Calgary. Korynia choir, Suzirya dancers and vocalists Stephania Romaniuk and Ihor Bohdan entertained the guests with vibrant and dazzling performances. Ambassador Shevchenko and Grod addressed the sold-out gathering. 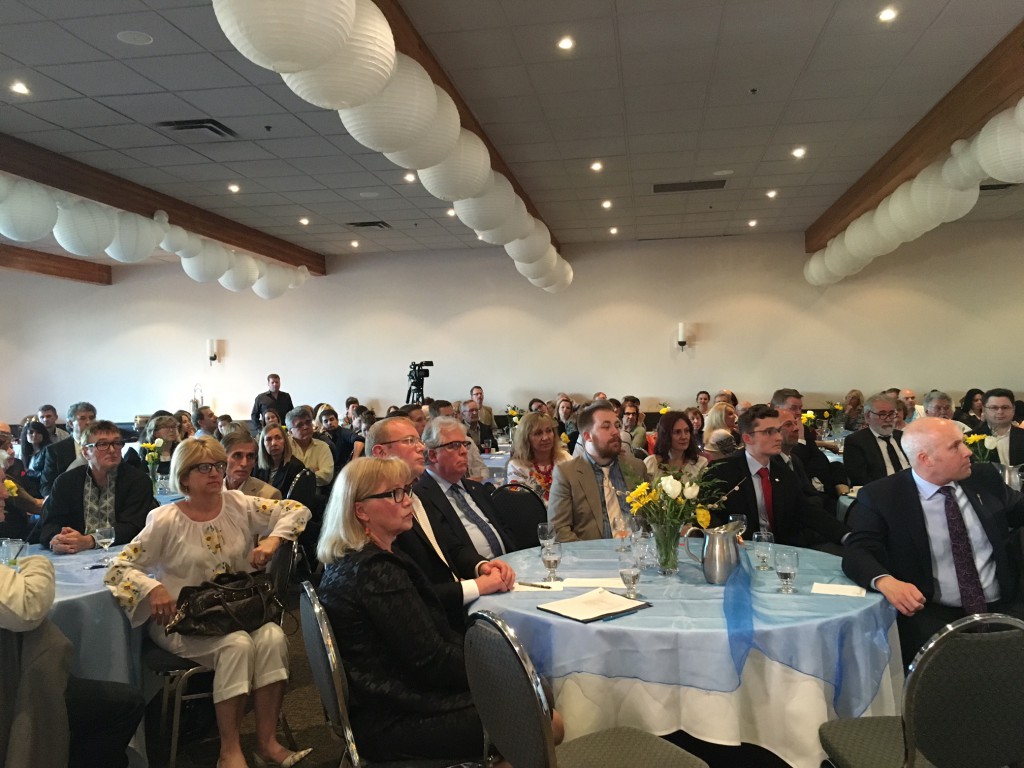 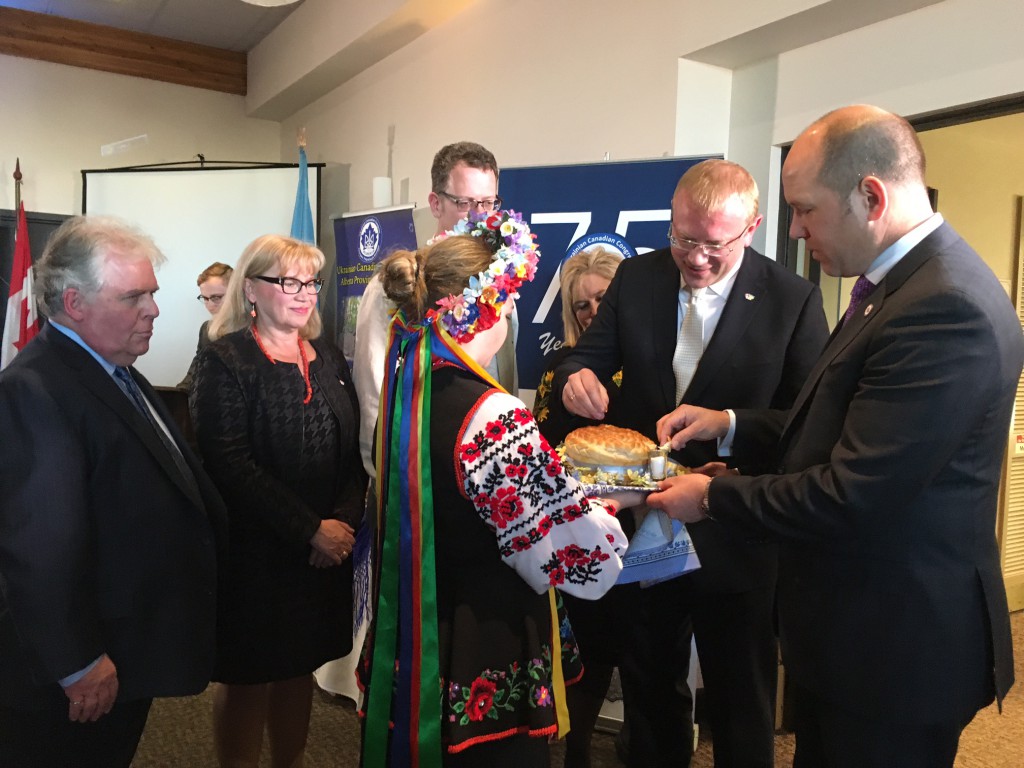 On April 18, Michael Hantzsch, President of the Calgary Ukrainian Professional and Business Association hosted a luncheon with Ambassador Shevchenko and Grod and leaders of Calgary’s business leaders.

“It was wonderful to host the 75th Celebration of UCC National across the province.  Alberta is home to close to 400,000 Albertans of Ukrainian descent and it was a privilege to showcase some of our organizations and the work we are carrying out here,” stated UCC-APC President Olesia Luciw-Andryjowycz. “The Ambassador and Paul were very well received and the 75th anniversary events rejuvenated many who attended in the events. Meetings with the Business community were well planned under the leadership of Vitaliy Milentyev, President Canada Ukraine Chamber of Commerce: Alberta and Michael Hantzsch; President Ukrainian Professional Business Association of Calgary.”

“On behalf of UCC National, I would like to sincerely thank all the organizers, sponsors and attendees of the events in Edmonton, Calgary and Red Deer, and for the very warm welcome we received during our visit,” stated Paul Grod, National President of the UCC. “Our community has very strong roots here in Alberta, and has always been an integral part of the UCC family. Thank you for your generosity, hard work and support for so many decades. I very much look forward to working together for many years to come.”