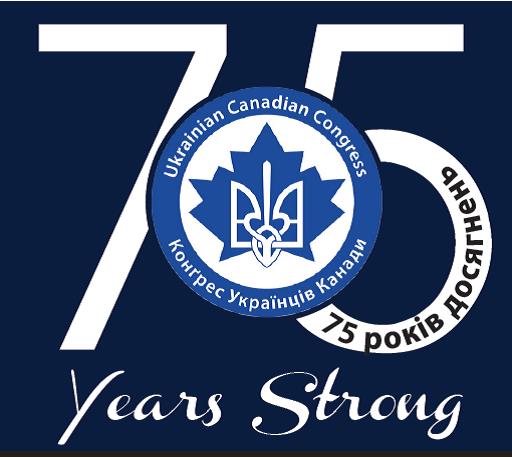 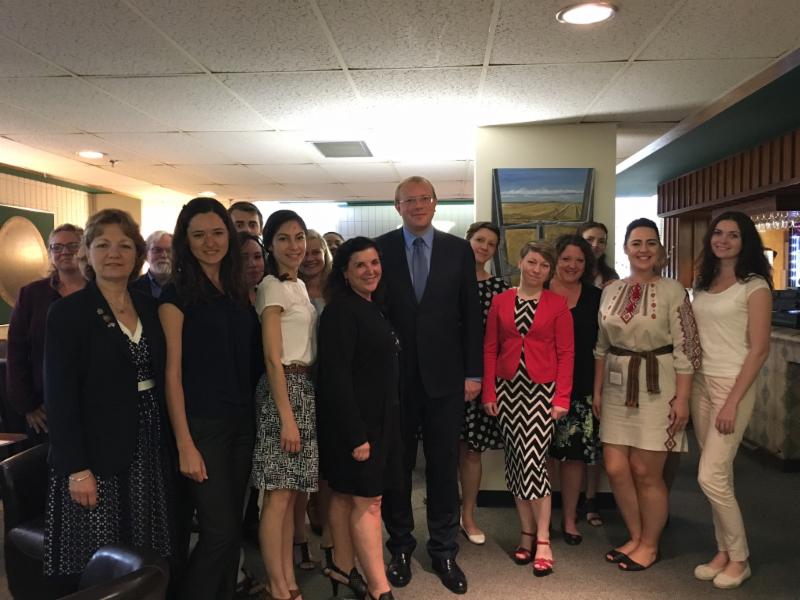 With students at the Johnson Shoyama Graduate School of Public Policy
On the evening of June 9, Ambassador Shevchenko, Olya Grod, Lesia Spolsky and MaryAnn Trischuk attended a reception and banquet with Yorkton’s and Canora’s Ukrainian Canadian community at St. Mary’s Cultural Centre in Yorkton.
An evening celebrated with true prairie hospitality, local dance groups Troyanda and Kalyna, and local musicians provided lively entertainment. The evening highlighted the close personal and cultural ties between Ukrainians in Saskatchewan and Ukraine – across many generations. 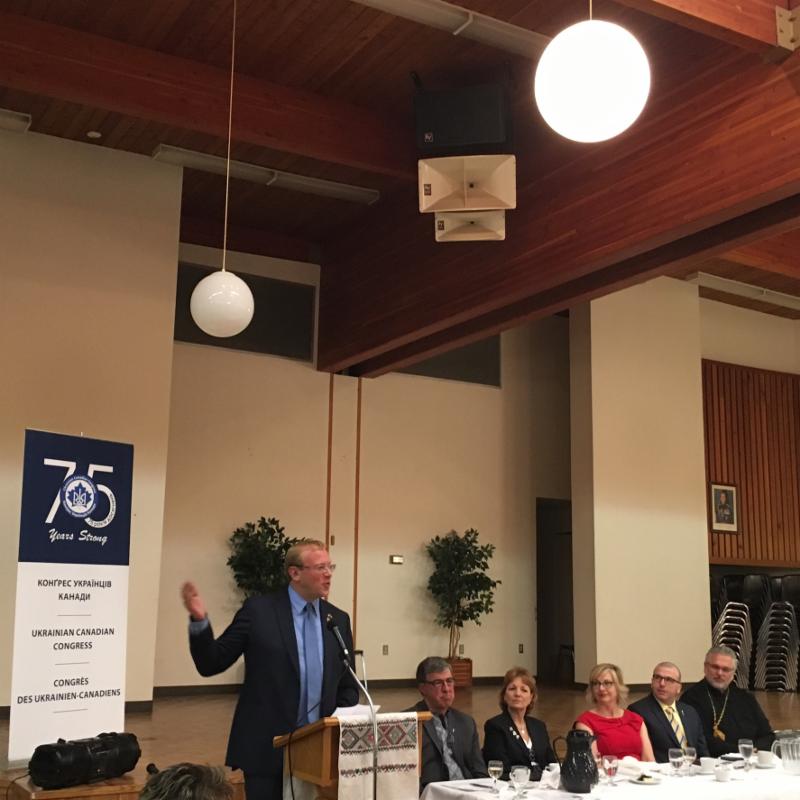 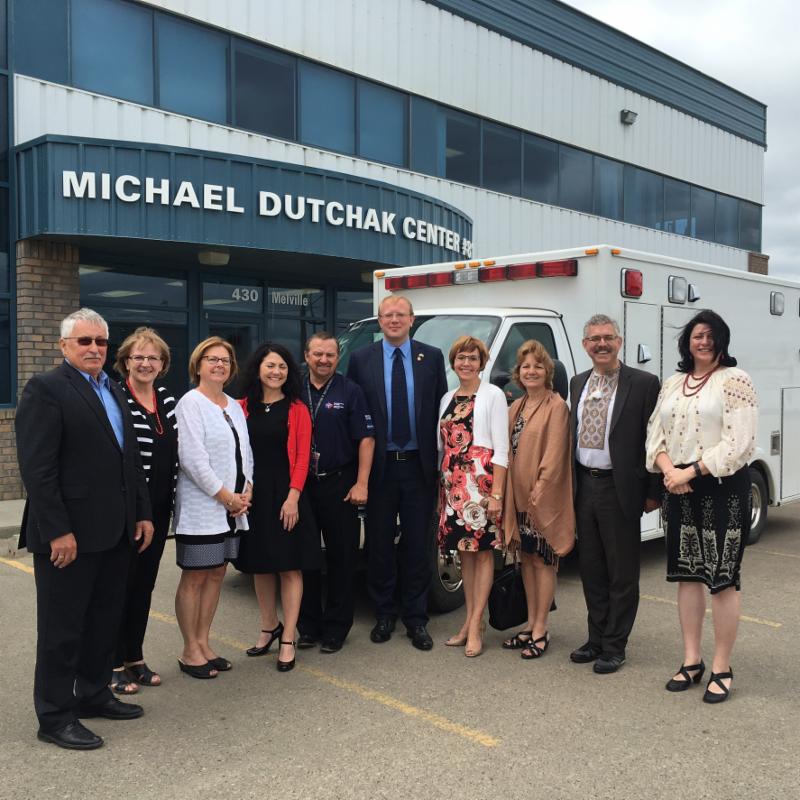 At the MD Ambulance Company
The Ambassador and the UCC delegation were hosted by the University of Saskatchewan College of Arts and Science, where they discussed student exchange programs between the University and Ukraine, academic and research exchanges, and the possibility of professors from the University of Saskatchewan teaching at Ukrainian universities with academics from several institutions of higher learning.
During a very full schedule in Saskatoon, Ambassador Shevchenko also had the opportunity to visit the Vaccine and Infectious Disease Organization; the Global Institute for Food Security; and meet with representatives of the Saskatchewan Trade and Export Partnership (STEP).
In the evening the Ambassador and the UCC delegation took part in a Meet and Greet with the Saskatoon Ukrainian community, where UCC Executive Director Olya Grod provided an update about the work of UCC National and Ambassador Shevchenko provided an update on the reform process in Ukraine and answered questions from the assembled guests. 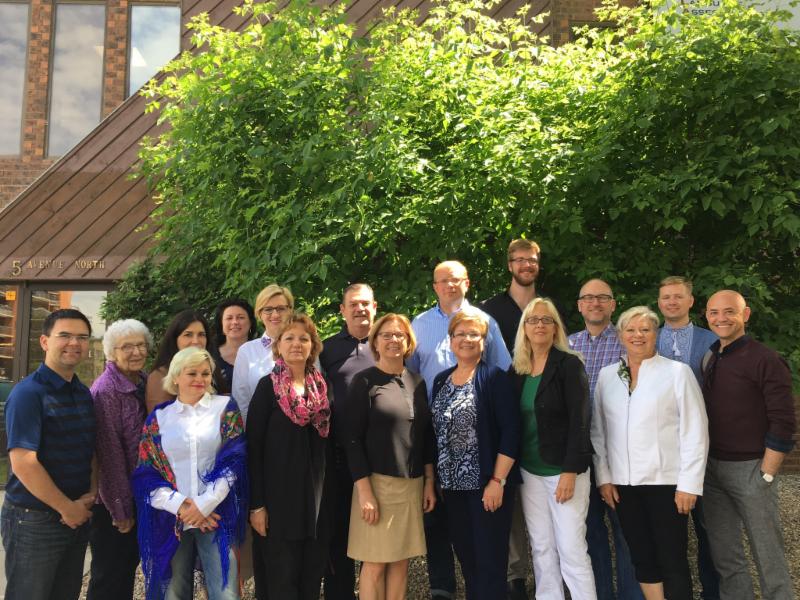 With the Saskatchewan Provincial Council Board of Directors
“This tour provided an opportunity to visit UCC Branches and to meet and discuss important issues,” stated Olya Grod. “We had many interesting discussions and I am taking back numerous ideas and suggestions to the UCC National Board of Directors.”
On Saturday morning UCC National President Paul Grod joined (via Skype) a meeting with the UCC Saskatchewan Provincial Council Board of Directors, which included UCC representatives from Regina, Saskatoon, Yorkton, Canora, Prince Albert and Weyburn. Ambassador Shevchenko discussed the current state of Canada-Ukraine relations and opportunities for cooperation in the future.
“This visit was a wonderful opportunity for me to experience Ukrainian life and culture in Saskatchewan. I thank the community for the warm welcome and a very moving experience,” stated Ambassador Shevchenko. “We had a great brainstorming session with representatives of the Government of Saskatchewan on how to get the most out of Saskatchewan-Ukraine relations, and I had an extraordinary chance to explore business and academic opportunities in the province. I am very much looking forward to further cooperation and to participating in the XXV Triennial Congress of Ukrainian Canadians, being held in Regina this fall.”
“We were honoured to celebrate the 75th anniversary of the UCC by Ambassador Shevchenko and representatives of UCC National,” stated MaryAnn Trischuk. “It was extremely important for the UCC Saskatchewan Provincial Council Board of Directors to have the opportunity to meet with the Ambassador and UCC National representatives, as it gave us an opportunity for a discussion platform on specific items and to clarify some areas of concern. This visit was also an opportunity to create awareness about the work being done on the national level on behalf of Ukrainians in Canada, and to strengthen ties with local branches and communities across our province.”
0 Likes