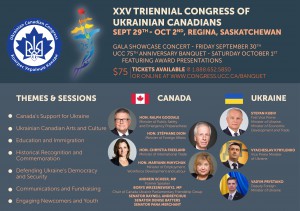 High-level delegations from both Canada and Ukraine will address the Congress and take part in plenary and breakout sessions. Tomorrow, the Congress will be addressed by

In the afternoon, Minister Freeland and 1st Deputy Prime Minister Kubiv will also take part in a breakout session, Is Ukraine Open for Business?, which will explore the growing business relationship between Canada and Ukraine in the context of the recently signed Canada-Ukraine Free Trade Agreement (CUFTA).

Other topics covered in tomorrow’s breakout sessions will be:

The weekend will include a Gala showcase at the Conexus Arts Centre featuring some of Canada’s top Ukrainian entertainers on September 30. The 75th Anniversary and Shevchenko Medals Presentations Banquet will take place on Saturday, October 1.