30 September 2016. REGINA, SK. The first day of the historic XXV Triennial Congress of Ukrainian Canadians concluded, with over 250 delegates taking part in discussions and dialogue that will set the agenda and priorities for the Ukrainian Canadian community for the next three years. 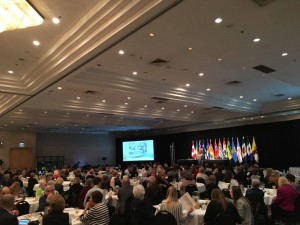 The first day of the XXV Congress opened with Engage-Inspire-Empower presentations on a series of ongoing, new and important community projects honouring and commemorating our past. 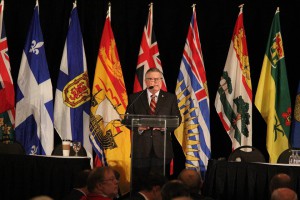 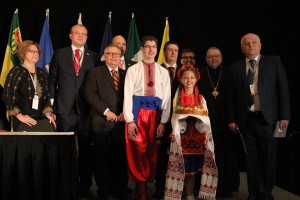 “Today – Ukraine is united. The President, Government, and Parliament are working together on important and complex reforms. We have begun systemic changes in the country, achieved economic stabilization and GDP growth,” stated Vice Prime Minister Kubiv. “Ukraine is demonstrating decisiveness in the reform process. That is why the support of Canada’s Ukrainian community is so needed and so valuable. Thanks to this support, we will triumph in the battle for a worthy future for Ukraine.”

Following the opening ceremony, the delegates of the Congress adopted the program, elected the Resolutions Committee, approved the Minutes of the XXIV Congress (2013), and heard the reports of the Verification, Nominations, Finance, and Audit Committees. 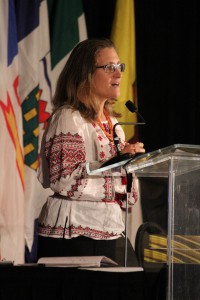 At lunch, the Honourable Chrystia Freeland, Minister of International Trade, delivered a passionate and moving keynote address to the Congress.  “Canada is determined to support the Ukrainian people as they work to build a more secure, stable and prosperous Ukraine,” Minister Freeland stated. Our new free trade agreement will help create economic growth and more jobs for Ukrainians and Canadians, especially for the middle class and those working hard to join it.”

Paul Grod, the National President of the UCC, then delivered his report to the XXV Congress. Grod highlighted the accomplishments of the UCC over the past three years, and the work of its member organizations who work in all areas of Ukrainian community life in Canada  – education, health, youth engagement, service groups, and caring for our elderly. Grod also underlined the UCC’s role in supporting the people and government of Ukraine as Ukraine battles Russia’s aggression and undertakes a comprehensive reforms process.

“I would like to thank the thousands of volunteers who contribute so selflessly and tirelessly to the successes of our community,” Grod stated. “Moving to the future, we must continue our community’s great work, and redouble our efforts in support of the people of Ukraine.”

In the afternoon, breakout sessions focused on developing priorities, strategies and future direction for the UCC. The themes included:

-Is Ukraine Open for Business?

Tomorrow, Plenary Sessions will focus on –

Post-Maidan Ukraine: Expressing the Sovereign Will of the Ukrainian People and

Shoulder to Shoulder: Canada’s Support for Ukraine – humanitarian, security and political – what’s next

Tonight, delegates and guests were treated to a Gala showcase at the Conexus Arts Centre featuring some of Canada’s top Ukrainian entertainers. The 75th Anniversary and Shevchenko Medals Presentations Banquet will take place tomorrow.