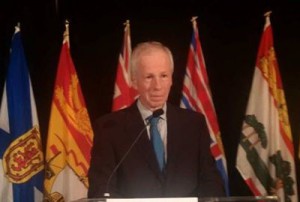 Speaking at the afternoon plenary session on the topic of Canada’s support for Ukraine, Minister Dion announced that Canada will provide up to $8.1 million in new funding to support the National Police of Ukraine. The new funding includes:

– up to $6.6 million over three years in support of a Police Training Assistance Project for Ukraine, including up to $100,000 for monitoring and evaluation activities, to support cadet and leadership training, outreach and public engagement activities, and the development of a police academy;

– up to $1.5 million toward the Ukraine Police Equipment Project to better equip the National Police of Ukraine, thereby transforming it into a more effective police service; and

– up to $40,000 through the Ukrainian Canadian Congress’s Ukraine Appeal, which collected funds for shipping and logistics to adapt vehicles, paramedic equipment and expertise to share with the conflict-affected people of Eastern Ukraine.

“Canada stands strongly with the people of Ukraine. We are working closely with the National Police of Ukraine to transform Ukraine’s police service into an effective, accountable and community-focused institution that embodies public trust,” stated Minister Dion. “Today’s announcement demonstrates our unwavering commitment to Ukraine and our encouragement of its efforts to counter corruption and secure sustainable reform.”

For the release from the Government of Canada on the new support, please see http://news.gc.ca/web/article-en.do?nid=1131719&tp=1

Participating in the plenary session with Minister Dion were Vadym Prystaiko, Deputy Minister of Foreign Affairs of Ukraine and Paul Grod, National President of the UCC.

“We thank the Government of Canada for their continuing support for Ukraine,” stated Grod. “The Ukrainian people have chosen democracy, freedom and dignity. We will continue our persistent efforts to ensure that their hopes are fulfilled and peace returns to Ukraine.” 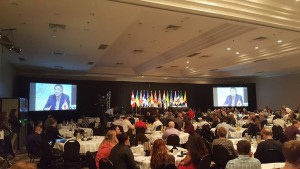 The second day of the Congress began with a plenary session on Post-Maidan Ukraine: Battling the Russian Invasion while Reforming Ukraine’s government, where Ukraine’s First Vice Prime Minister and Minister of Economic Development and Trade Stepan Kubiv, Deputy Prime Minister Vyacheslav Kyrylenko were joined by video conference from Kyiv by Canada’s Ambassador to Ukraine Roman Waschuk and Former Minister of Finance of Ukraine Natalia Jaresko. The panel addressed successes and challenges in the reform process in Ukraine, and outline what we can do to help shape the new Ukraine.

Two rounds of breakout sessions followed the morning plenary, where presenters and delegates focused on developing priorities, strategies and future directions for the UCC. The breakout sessions included robust and engaging discussions on such topics as youth and newcomer engagement; Ukrainian Canadian arts and culture; immigration; fundraising; historical commemoration, and community advocacy. 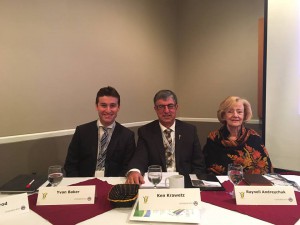 Tonight the 75th Anniversary Banquet will feature presentation of thirteen Shevchenko Medals, the highest honour which is the highest honour the Ukrainian Canadian community can award outstanding leaders.  Awards will also be presented to exceptional UCC Leadership and UCC Youth leadership award winners from across Canada. Dignitaries from both Canada and Ukraine are scheduled to attend and speak at tonight’s event. Further information about all the award winners is available online at