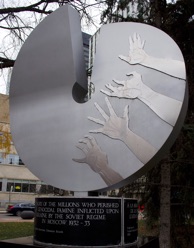 The groundbreaking oral history project Children of Holodomor Survivors Speak consists of interviews with children of the survivors of the Ukrainian Holodomor (genocidal famine) and is the first such project to address its impact on the lives of the second generation of survivors in the diaspora.

Studies of the intergenerational transmission of trauma and of Post-Traumatic Stress Disorder (PTSD) in children of Holocaust survivors and the Armenian and African genocides exist. The generational aspect of a legacy of survivorship, is highly valuable information to gather for further study and understanding. For example, a sense of longing, mourning, burden or distrust, degrees of communicativeness and coping, of the strength and resilience of survivorship, all have an impact on the successive generation’s identity and feelings of cohesiveness with their communities.

Project coordinator and UCRDC Archivist Iroida Wynnyckyjstates: “The Ukrainian Canadian Research and Documentation Centre has the experience and infrastructure needed to undertake an oral history interview project of this kind.”

The project’s Interviewer, Sophia Isajiw has said: “The purpose of this oral history project is not to record the history of the Holodomor’s genocidal trauma, but rather, what became of the children of the survivors of the Holodomor and what do they see as the Holodomor’s legacy for Ukrainians? The fact that the project is done in North America is equally valuable because it enables a discussion of how the Holodomor has become a diaspora marker of Ukrainian identity. Oral history interviews with the children of survivors, who are themselves now in their late 40’s to 70’s, provides a springboard for such a discussion and its further research.”