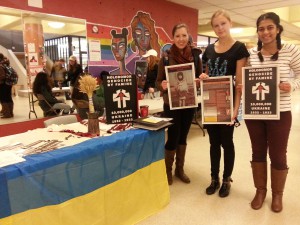 In Ukrainian villages and countryside, all available food grains and farm animals were confiscated or destroyed by the Soviet regime. Soviet NKVD and Red army units deliberately sealed the borders. Millions of starving Ukrainians were condemned to a gruesome death deprived of any sustenance in one of the most fertile agriculture zones on earth, simply for being Ukrainian.
The truth about Holodomor, death by starvation, was deliberately concealed for many decades by the Soviet Union, in the hope that its memory would be lost forever.

A Holodomor Exhibition Information Table with posters encouraged reflective discussion through handout materials and bookmarks to engage Ottawa’s diverse community in the vibrant University Centre of University of Ottawa, to honor the memory of millions of innocent Ukrainian lives deliberately starved to death under flagrant repression and criminal atrocities orchestrated by the Soviet regime.

“Today SUSK uOttawa contributed to defeating indifference by reaching beyond to inform broad-based multicultural University of Ottawa community, many of whom had not previously been aware of Holodomor and Soviet atrocities.

The complexity of harm done to Ukrainian people is so enormous, that we can witness ongoing damaging elements today in contemporary Ukraine.”

Petula Fernandes, student at Health Sciences department of the University of Ottawa confirmed the event contributed with dignity for those who wished to learn more : “It is very important to be involved in commemoration of Holodomor – a genocide by a man-made famine perpetrated by Joseph Stalin’s regime in Soviet Ukraine during 1932-33 that killed 10 million Ukrainians.”

“My grandmother’s brother and Holodomor survivor Fedir from Khreshchate village, Poltava oblast, would often serve me as a potent reminder of the failed attempt of Soviet empire to fully destroy the existential centre of Ukrainian nation and culture – its village.”

Numerous University of Ottawa students, professors, community members and other participants demonstrated their care about flagrant violation of human rights in Ukraine. Their compassion and open-heartedness made our Holodomor Awareness day rewarding and meaningful.