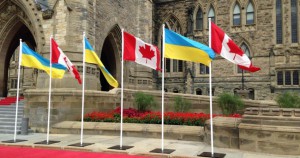 29 November, 2016. OTTAWA. The Ukrainian Canadian Congress (UCC) applauds yesterday’s announcement by Canada’s Department of Global Affairs that 15 individuals, including six members of the Russian State Duma, have been subjected to asset freezes and dealings prohibitions for their role in Russia’s continuing illegal occupation of Crimea.

The Department of Global Affairs stated, “These sanctions are in response to the September 18 election of officials residing in Crimea to Russia’s State Duma. Canada does not support the legitimacy or the outcome of these elections held in the occupied Crimean peninsula, as it has never recognized Russia’s illegal annexation of Ukraine’s Autonomous Republic of Crimea and the city of Sevastopol.”

The full release from the Government of Canada is available here: http://news.gc.ca/web/article-en.do?nid=1161379&tp=1

Canada’s Minister of Foreign Affairs, the Honourable Stéphane Dion, stated, “In the face of ongoing Russian military aggression and illegal occupation, Canada has taken a number of steps to support the Ukrainian people as they work to restore political and economic stability, including imposing sanctions against those responsible for the ongoing crisis. Today’s announcement of additional sanctions underscores Canada’s unwavering commitment to the sovereignty of Ukraine.”

Paul Grod, National President of the UCC, stated, “I commend yesterday’s announcement by the Government of Canada. Crimea was, is and always will be sovereign Ukrainian territory. Russia’s ongoing illegal occupation has brought terror and fear to the people of Crimea; Crimean Tatars and Ukrainians are especially targeted for persecution by the Russian regime. It is crucial that Canada and our allies maintain the pressure on Russia until the occupation of Crimea is reversed and Russia stops its war of aggression in eastern Ukraine.”