30 November, 2016. OTTAWA. The Ukrainian Canadian Congress, in partnership with the Canada-Ukraine Parliamentary Friendship Group and the Embassy of Ukraine in Canada, held a solemn commemoration in Canada’s Parliament to mark the 83rd anniversary of the Holodomor Famine-Genocide in Ukraine.

In 1932-33 the totalitarian regime of Soviet dictator Joseph Stalin sentenced the Ukrainian nation to death by starvation. Millions of children, women and men were condemned to death because of the Ukrainian peoples’ aspiration for independence, their desire to speak their language and maintain their culture and traditions. The fourth Saturday of November is designated Holodomor Memorial Day in Canada. 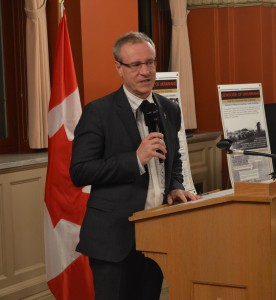 Hosted by the Canada-Ukraine Parliamentary Friendship Group (CUPFG), the Holodomor Commemoration on the Hill was attended by dozens of Members of Parliament and Senators, and the Ukrainian Canadian community of Ottawa. Borys Wrzesnewskyj (MP, Etobicoke-Centre), the Chair of the CUPFG, was Master of Ceremonies for the Commemoration. Nadia Zelem, daughter of Holodomor survivor Halyna Zelem, lit the ceremonial candle. Mr. Wrzesnewskyj recognized Mr. Ian Ihnatowycz, Vice-Chair of the UCC Advisory Council, community leader and producer of the motion picture Bitter Harvest. 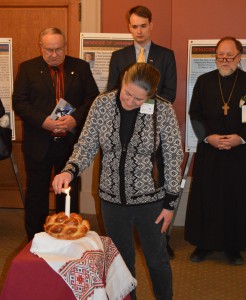 Rev. Fr. Ihor Okhrimtchouk and Rev. Fr. Peter Galadza led the opening prayer for the victims of the Holodomor. 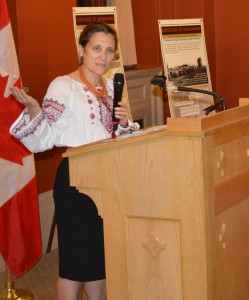 The Honourable Chrystia Freeland, Minister of International Trade, spoke on behalf of Prime Minister Trudeau. Minister Freeland stated, “Today, we stand with Ukrainians in sombre reflection of this ghastly event and reaffirm our steadfast vow to never stay silent in the face of violence or hate in any form. We honour the memories of the Holodomor victims by ensuring that successive generations never forget the painful lessons of the past.” 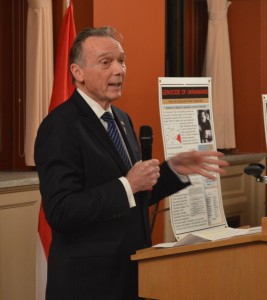 The Honourable Peter Kent, speaking on behalf of the Leader of the Opposition, stated, “In 2008, Canada became the first country to officially recognize the Holodomor as genocide. The Ukrainian famine, perpetrated by the communist regime of Josef Stalin, remains one of the most atrocious crimes against humanity ever committed. The Conservative Party of Canada will continue to stand steadfast in support of the people of Ukraine.” 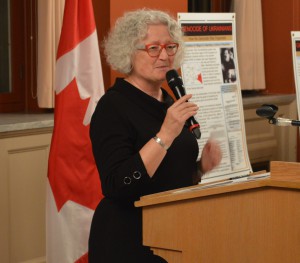 Linda Duncan (MP, Edmonton-Stratchcona) spoke on behalf of the New Democratic Party Caucus. She stated, “It is important that as elected officials we continue to stand together in speaking against any current atrocities. Including in Ukraine. Towards this goal it is equally important that we support the efforts of the Canadian-Ukrainian community to educate Canadians on the atrocities suffered during the Holodomor.”

His Excellency Andriy Shevchenko, Ambassador of Ukraine to Canada, offered heartfelt remarks on behalf of the Government of Ukraine. Ihor Michalchyshyn, CEO of the UCC, thanked everyone in attendance for participating in the Holodomor Commemoration on the Hill.

Rising in the House of Commons earlier in the day, Julie Dzerowicz (MP – Davenport) invited Members of Parliament to visit the Holodomor National Awareness Tour Mobile Classroom, (http://www.holodomortour.ca/) which was present on the Hill yesterday.

The mobile classroom, a 40-ft RV, which has been travelling across Canada, provides students with an innovative learning experience about social justice, human rights and democratic values in relation to the genocide by famine which killed millions of Ukrainians. The Government of Canada, through Inter-Action, Canada’s multiculturalism grants and contributions program, has provided a three-year grant valued at $1.5 million to support this project. 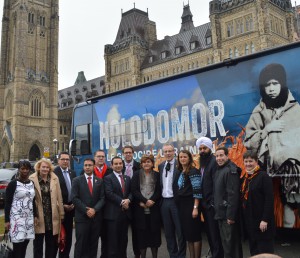 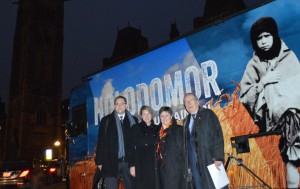 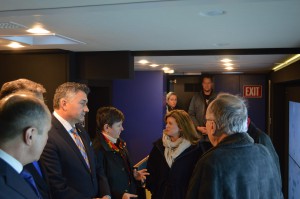 The Ukrainian Canadian Congress would like to express its heartfelt gratitude to all those who attended the National Holodomor commemoration ceremony at the Parliament of Canada, and who visited the Mobile Classroom.