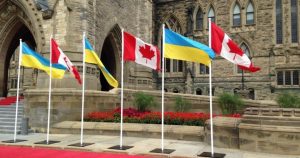 – the Honourable Ahmed Hussen,  Minister of Immigration, Refugees and Citizenship;

– the Honourable Patricia A. Hajdu, Minister of Employment, Workforce Development and Labour;

– the Honourable Maryam Monsef, Minister of Status of Women

Prime Minister Trudeau has assembled a very talented cabinet and caucus that we are confident will provide visionary international leadership and will undertake coordinated efforts to end the on-going Russian attacks on Ukraine and other parts of the world.  The UCC calls on the Government of Canada in cooperation with the US and its other allies to develop and spearhead a coordinated strategy to deter Russia’s continued efforts to undermine European and global security.

The UCC calls upon Canada to enhance  its support for Ukraine as it defends its people and undertakes irreversible reforms to modernize its economy and government institutions.  This requires a coordinated and concerted effort by all relevant Ministries, namely Foreign Affairs, Defence, International Development, Public Safety, Immigration, International Trade, Health, and Justice, among others.

Canada’s unified strategy should include the following steps:

For more information please see the UCC’s Call to Action