January 31, 2017. OTTAWA.  For the last several days, the Russian Federation and its proxy forces have unleashed intensive artillery, Grad rocket and mortar shelling of Ukrainian military positions and residential areas near Avdiyivka and surrounding locations.

According to the Ukrainian army’s General Staff, eight Ukrainian soldiers were killed and 36 wounded due to shelling and attacks by Russian and proxy forces on January 29-January 30 alone.

The United States Mission to the OSCE stated, “Russia and the separatists initiated the violence in Avdiyivka.  We call on Russia to stop the violence, honor the ceasefire, withdraw heavy weapons, and end attempts to seize new territory beyond the line of contact.”

As Ukraine’s Ministry of Foreign Affairs stated, “The Kremlin’s actions may qualify as a war crime, a gross violation of the Geneva Convention of 12 August 1949, and an unlawful, wanton and extensive destruction of property not justified by military necessity.”

“This escalation in violence is a very troubling sign that Russia intends to intensify its war against Ukraine,” stated Ihor Michalchyshyn, Executive Director and CEO of the Ukrainian Canadian Congress. “The Russian Federation has repeatedly shown through its actions that it has no intention of abiding by the Minsk Agreements and withdrawing its army from sovereign Ukrainian land. As one of Ukraine’s steadfast allies, it is imperative that Canada respond in support of Ukraine.”

International pressure on Russia must be increased in order to ensure that Russia end its invasion of Ukraine.  The UCC calls on Canada to:

Ukraine has been fighting to defend itself from Russia for almost three years. Russia has consistently breached ceasefire agreements and ignored calls from the international community to end its invasion of Ukraine and reverse its occupation of Ukrainian territory. The response of the international community must be strengthened, and we call on Canada to lead that response. 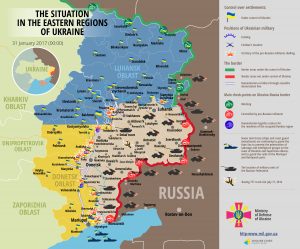