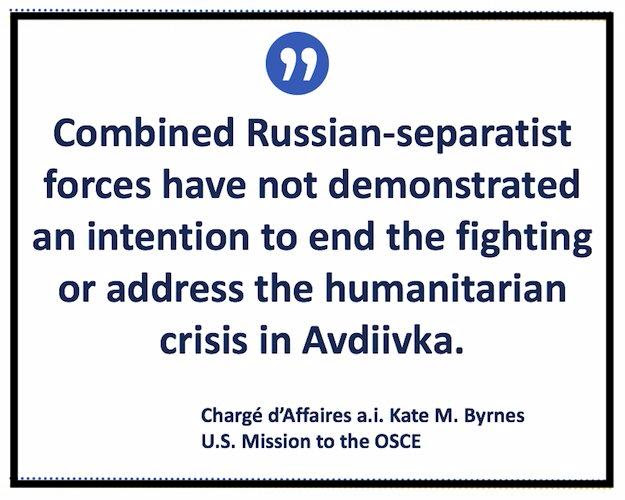 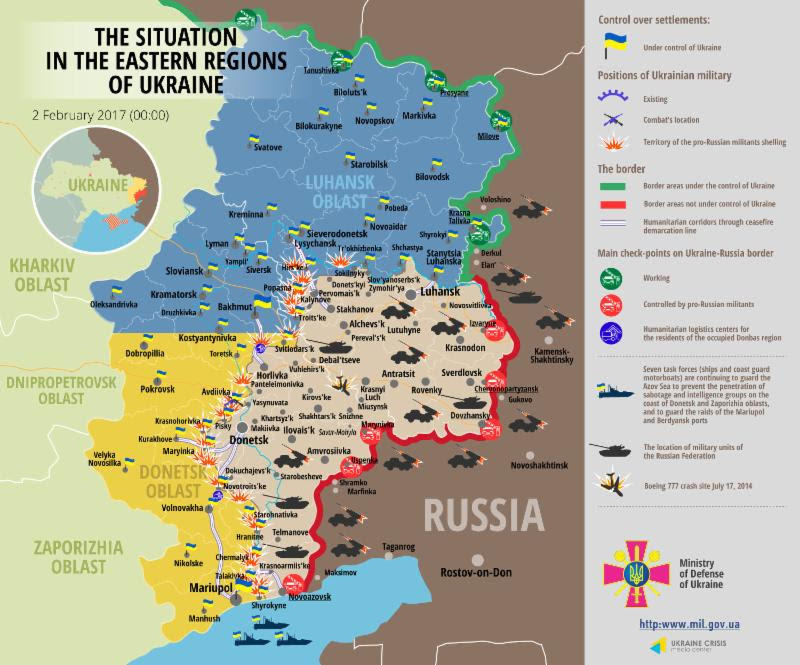 2. Ukraine’s President: The world must exert greater pressure on Russia to achieve ceasefire
Ukraine’s President Petro Poroshenko stated, “Russian militants continue shelling Avdiivka giving no chance to restore electricity supply. The world must exert greater pressure on Russia to achieve ceasefire.”
3. European Council President on Russia’s aggression against Ukraine
European Council President Donald Tusk stated, “The ceasefire violations that have taken place over the last few days have demonstrated a new level of intensity and brutality. The humanitarian situation in the Avdiivka region is getting critical. We are reminded again of the continued challenge posed by Russia’s aggression in eastern Ukraine as well as the threat to the implementation of the Minsk agreement. The fighting must stop immediately. The ceasefire must be honoured. Russia should use its influence to disengage the Russian-backed separatists.”
4. US Mission to OSCE: “Combined Russian-separatist forces have not demonstrated intention to end fighting”
Speaking at a meeting of the OSCE Permanent Council, US Charge d’Affaires Kate Byrnes stated, “We are particularly concerned that fighting continues unchecked in Avdiivka, despite efforts by Ukrainian authorities to end the violence.  Ukraine called for the restoration of the ceasefire, and for security guarantees to be provided to OSCE monitors, so that repair teams can work to restore electricity, water, and heat to 17,000 people in Avdiivka.  Efforts undertaken yesterday to get critical infrastructure working again had to be suspended when repair teams were fired upon.  Ukraine has taken significant steps to provide emergency heating and evacuate residents from Avdiivka if necessary. Similarly, Ukraine called for an emergency Permanent Council meeting, as well as an emergency Trilateral Contact Group meeting, in an effort to find a way forward.  Combined Russian-separatist forces have not demonstrated an intention to end the fighting or alleviate the humanitarian crisis in Avdiivka.”
5. Canada’s Minister of Defence: Canada’s training mission having meaningful impact in Ukraine
Canada’s Minister of National Defence Harjit S Sajjan, “says the federal government is concerned about a new outbreak of fighting in Ukraine and is looking at ways to ‘improve’ Canada’s military support to the country,” the Canadian Press reported. Canada’s military training mission to Ukraine, Operation UNIFIER, in which 200 Canadian Armed Force personnel are training Ukrainian forces, expires at the end of March. Sajjan stated on 1 February, “I’m looking at the options right now in terms of how we can improve our support, what changes that we need to make. But one thing is for sure, that Canada remains committed to Ukraine. […] “I’ve always said when we send troops, we want to make sure they have a meaningful impact. And we are having a meaningful impact in Ukraine,” the Canadian Press reported.
0 Likes