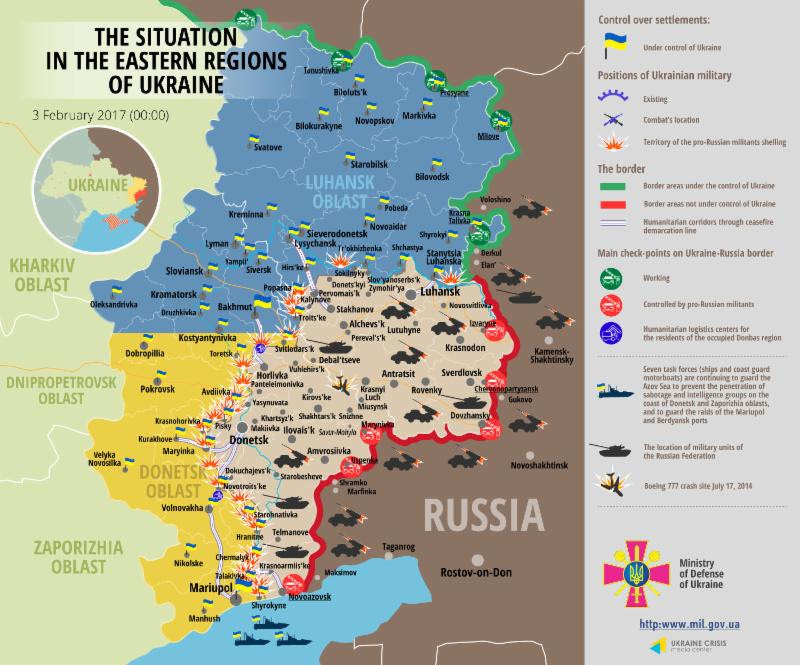 2. US Senate Armed Services Committee Chair Urges President to provide defensive lethal assistance to Ukraine
On February 2, US Senate Armed Services Committee Chairman John McCain sent a letter to President Trump, in which McCain stated, “In the first of what will be many tests for your new administration, Russia and its proxy forces launched attacks against Ukrainian forces this week, killing at least seven Ukrainian soldiers and wounding dozens more. That this surge of attacks began the day after he talked with you by phone is a clear indication that Vladimir Putin is moving quickly to test you as commander-in-chief. America’s response will have lasting consequences.  Vladimir Putin’s violent campaign to destabilize and dismember the sovereign nation of Ukraine will not stop unless and until he meets a strong and determined response. Therefore, in light of the latest Russian attacks and the prospect of future aggression against Ukraine, I urge you to exercise the authority given to you by the National Defense Authorization Act for Fiscal Year 2017 to provide defensive lethal assistance to Ukraine to defend its territory against further violations by Russia and its separatist proxies. At the same time, so long as Russia continues to occupy Crimea and destabilize Ukraine, I implore you to maintain current sanctions against Russia. And based on Russia’s attempted interference in our elections, I urge you to expand current sanctions against Russia. Ukrainians are not asking Americans to do their fighting. Nearly 10,000 Ukrainians have died to protect their homeland and many more are serving and have sacrificed for the cause of a free and united Ukraine. But America does have a proud history of helping free people to defend themselves. We should do so once more by giving our Ukrainian friends the assistance they need and deserve. Failing to do so now not only risks Ukraine’s sovereignty, but the further erosion of American credibility.” The letter from McCain is available at http://www.mccain.senate.gov/public/index.cfm?p=press-releases&id=E33F2914-CB1B-4D6D-A800-D8B5A34F8FE3
3. Bellingcat Report: Russian-terrorist forces using civilians as human shields
On February 2, the investigative reporting group Bellingcat published a report confirming that in their attacks on Avdiivka, Russian-terrorist forces are deliberately placing Grad rocket system in residential areas under their occupation. The report states, “The available evidence clearly documents that on 31 January 2017, multiple attacks with MLR systems were launched in proximity of the hypermarket Auchan in Donetsk. The location deep inside the so-called “DNR” and the firing directing pointing toward Avdiivka clearly document the responsible side for these particular attacks. One launch site is around 200 meters east of the hypermarket, and in fewer than 500 meters from a school and residential area. The second launch site is in proximity of the bypass and around 600 meters from an industrial area and 1000 meters from a residential area. Some of the attacks occured during the day while the nearby bypass was also used by civilians. Given the proximity of both launch sites to civilian infrastructure in the area, a potential Ukrainian counter attack to supress and respond to the rocket fire would have automatically risked civilian lives in the area. The cross-country mobility of the likely used MLR system, BM-21 Grad, would have allowed alternative launch sites. However, the repeated usage of the launch site 200 meters east of the hypermarket Auchan strongly suggest that the selection of this area happened on purpose, deliberately risking the lives of the civilians in the area.” The full report from Bellingcat is available athttps://www.bellingcat.com/news/uk-and-europe/2017/02/02/human-shields-in-donetsk-launching-grads-near-a-residential-area/
4. US at UN calls on combined Russian-separatist forces to restore ceasefire
On 2 February at a meeting of the UN Security Council, US Ambassador to the UN Nikki Haley stated, “I consider it unfortunate that the occasion of my first appearance here is one in which I must condemn the aggressive actions of Russia. It is unfortunate because it is a replay of far too many instances over many years in which United States Representatives have needed to do that. It should not have to be that way. We do want to better our relations with Russia. However, the dire situation in eastern Ukraine is one that demands clear and strong condemnation of Russian actions. The sudden increase in fighting in eastern Ukraine has trapped thousands of civilians and destroyed vital infrastructure. And the crisis is spreading, endangering many thousands more. This escalation of violence must stop. The United States stands with the people of Ukraine, who have suffered for nearly three years under Russian occupation and military intervention. Until Russia and the separatists it supports respect Ukraine’s sovereignty and territorial integrity, this crisis will continue. Eastern Ukraine, of course, is not the only part of the country suffering because of Russia’s aggressive actions. The United States continues to condemn and call for an immediate end to the Russian occupation of Crimea. Crimea is a part of Ukraine. Our Crimea-related sanctions will remain in place until Russia returns control over the peninsula to Ukraine. The basic principle of this United Nations is that states should live side by side in peace. […]The United States calls on Russia and the combined Russian-separatist forces to fulfill their commitments in the Minsk agreements and fully restore and respect the ceasefire.”
0 Likes