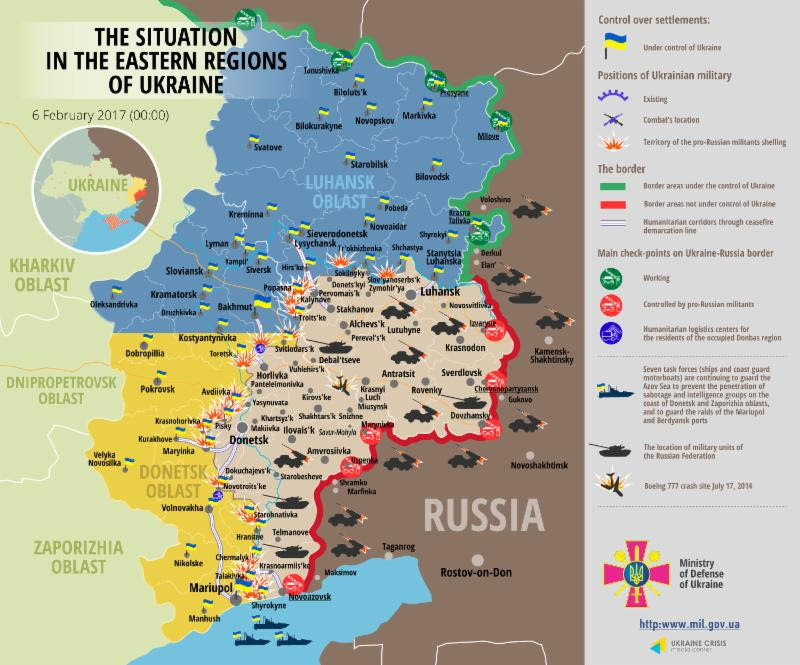 2. Ukraine at UN: Russian actions in Avdiivka may qualify as a war crime
Speaking at a meeting of the UN Security Council on February 3, Ukraine’s Permanent Representative to the UN Volodymyr Yelchenko stated, “Ukraine continues to be fully committed to implementing the Minsk agreements in their entirety. […] On the contrary, Russia as the party to the conflict in Donbas and its proxies blatantly violate Minsk agreements from the very beginning. They continued their attacks and occupied several Ukrainian towns and localities. As for now, Russian proxies occupied about 1700 sq.km leaving far beyond the contact line agreed in Minsk on September 19, 2014. Before the ‘crisis in Avdiivka’ there was the battle for Debaltsevo two years ago captured by Russian forces immediately after Minsk summit on February 12, 2015 and contrary to decisions taken by leaders of Ukraine, Russia, Germany and France. In early hours of Sunday, 29 January, Russian army and its proxies began massive artillery attacks on Avdiivka and its suburbs from Donetsk and Yasynuvata residential areas, which are under control of the Russia-led terrorists, and sent assault units to storm positions of the Ukrainian Armed Forces. The Russian forces used multi rocket launcher systems ‘Grad,’ tanks, 152mm and 122mm artillery, 120mm and 82mm mortars. All these weapons are forbidden under the Minsk Agreement. On 29 January, alone the Ukrainian positions were shelled nearly four hundred times. […] Destroying critical infrastructure and thus creating humanitarian disaster is a terrorist tactic aimed primarily at civilians. […] The mentioned Russia’s actions may qualify as a war crime. Ukraine will add evidence related to the recent escalation and indiscriminate attacks on the civilian infrastructure to our claim against Russia on terrorism to International Court of Justice. This is the first but very important step in bringing Russia to justice for its mounting violations of the UN Charter and international law. […] We once again urge the Russian Federation to exercise its responsibility in following the Minsk commitments, specifically their security and humanitarian provisions. We urge Russia to halt support to terrorists and stop building hybrid terrorist armies in the Eastern Ukraine as well as its military build-up along Ukraine’s eastern borders. […] The reality is simple. It is Russian weapons that kill Ukrainians. It is Russian soldiers and mercenaries come to Ukraine to earn money for murdering. […]It looks like Russia lives in a parallel reality created by propagandists from ‘Russia Today.’ And this parallel reality is even more twisted when [Russian Permanent Representative to the UN] Ambassador Churkin stands to talk about Crimea.”
3. Ukraine’s President speaks with US President
On February 5, Ukraine’s President Petro Poroshenko held a phone conversation with US President Donald Trump. President Poroshenko’s press service reported, “Both leaders express readiness to explore additional steps to enhancing the strategic partnership between Ukraine and the United States. A particular attention was paid to the settlement of the situation in Donbas and to achieving peace by political and diplomatic means. The two leaders expressed deep concern about the spike in tension and deterioration of humanitarian situation, especially in the area of Avdiivka. They stressed on the need for establishing immediate ceasefire regime. The President of Ukraine expressed gratitude to the Head of the White House for firm support of Ukraine’s sovereignty and territorial integrity. Petro Poroshenko highlighted the need to intensify economic and business ties in order to assist in creating new employment opportunities and boosting the welfare of citizens of both countries. They also talked about the forthcoming visit of President Petro Poroshenko to Washington, the preparation of which will be in focus of Ukraine’s Foreign Minister’s travel to the US.”
4. Associated Press: EU envoys back keeping Russian sanctions
The Associated Press reported, “The European Union’s top diplomats vowed Mondayto uphold sanctions against Russia for destabilizing conflict-torn Ukraine, despite confusion over how U.S. President Donald Trump plans to manage his relations with Moscow. Determined to wait no longer for a clear message from Washington, EU foreign ministers said their economic sanctions must remain in place until Russian President Vladimir Putin respects his promise to work for a cease-fire in eastern Ukraine and ensure that heavy weapons are withdrawn from border areas.EU foreign policy chief Federica Mogherini underlined that the EU will never recognize Russia’s 2014 annexation of the Crimean Peninsula, and insisted all sides must respect the Minsk peace agreement […] ‘I cannot say where the U.S. administration stands on this, but I can say where the Europeans stand on this,’ Mogherini said. […] ‘The U.K. will be insisting that there is no case for the relaxation of the sanctions, every case for keeping up the pressure on Russia,’ British Foreign Secretary Boris Johnson said.”
0 Likes