February 9, 2017 – OTTAWA. On February 3, 2017 representatives of the Ukrainian Canadian Congress (UCC) met with senior government officials from the Departments of Global Affairs and National Defence to discuss the development of Canada-Ukraine relations.

The meeting of the Canada Ukraine Stakeholder Advisory Council (CUSAC), was hosted by the Department of Global Affairs, and co-chaired by Alison LeClaire, Senior Arctic Official and Director General, Circumpolar Affairs and Eastern Europe and Eurasia; and Paul Migus, UCC Director of Government Relations.

“We were so pleased to be able to host representatives of the Ukrainian-Canadian Community here at Global Affairs Canada. The Government of Canada remains committed to working with Ukraine, and there is no more important connection between our two countries than people-to-people ties,” stated Ms. LeClaire. “This connection can be seen across politics, business, and the arts. The opportunity provided by CUSAC to sit down and discuss such a wide array of issues is of great benefit to the government, and , I trust, our partners in the community.”

“We are thankful for the opportunity to meet with many high-level government officials who are responsible for implementing Canada’s many bilateral and multilateral programs in Ukraine,” stated Migus. “The CUSAC is an important occasion for our community to provide direct input, feedback and recommendations.” 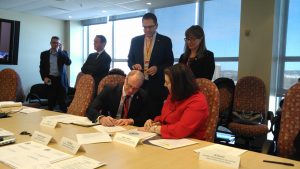 The meeting began with the signing of Terms of Reference for the CUSAC, “a forum for consultations and cooperation between the Government of Canada (represented by Global Affairs Canada) and the Ukrainian Canadian community (represented by the UCC), to ensure the exchange of information and insight pertaining to the development and enhancement of Canada-Ukraine relations, recognizing the special partnership between Canada and Ukraine.”

Canada’s Ambassador to Ukraine, His Excellency Roman Waschuk, joined the meeting from Kyiv by videoconference to provide a strategic overview of recent developments in Ukraine. Senior government officials provided an update on Canada-Ukraine relations and an update on various aspects of Canadian programming in Ukraine; on international assistance; peace and stabilization; trade; and defence reform.

The UCC delegation presented its perspectives on Canada-Ukraine relations and stated its priorities to the Government of Canada. The discussion focused on six themes:

For the briefing note presented by the UCC, which outlines the community’s priorities, please see

During the luncheon, which followed the meeting, the participants had an opportunity to hear from Ukraine’s Ambassador to Canada, His Excellency Andriy Shevchenko.

“We look forward to continuing, regular dialogue with Global Affairs Canada on these and other issues,” stated Alexandra Chyczij, First Vice-President of the UCC. “As Ukraine defends itself against Russian aggression, Canada has a pivotal role to play as one of Ukraine’s closest friends, and this meeting was a valuable opportunity to exchange views with our government.”

The UCC was represented by: