1. Russian Invasion of Ukraine
The General Staff of Ukraine’s Armed Forces reported at 12:30 PM Kyiv time that in the last 24 hours, no Ukrainian soldiers were killed or wounded in action. Towards Donetsk, Russian-terrorist forces shelled Ukrainian positions near Avdiivka and Svilodarsk with mortars, artillery and tanks. Towards Luhansk, Russian-terrorist forces shelled Ukrainian positions at Krymske with artillery. Near Popasne, Russian-terrorist forces shelled Ukrainian positions with mortars. Towards Mariupol, Russian-terrorist forces shelled Ukrainian positions at Shyrokyne and Lebedynsk with artillery and mortars.
2. Bipartisan Group of US Senators Introduce Legislation Establishing Congressional Oversight of Russian Sanctions relief
On February 8, a bipartisan group of US Senators introduced legislation – The Russia Sanctions Review Act of 2017 – which provides congressional oversight of any decision by the Administration to remove US sanctions against Russia. Senator Lindsey Graham (R-SC) stated, “Russia has done nothing to be rewarded with sanctions relief. To provide relief at this time would send the wrong signal to Russia and our allies who face Russian oppression. Sanctions relief must be earned, not given.” Senator Ben Cardin (D-MD) stated, “If the U.S. were to provide sanctions relief to Russia without verifiable progress on the Minsk Agreements, we would lose all credibility in the eyes of our allies in Europe and around the world. Since the illegal annexation of Crimea and invasion of Ukraine by Russia in 2014, Congress has led efforts to impose sanctions on Russia. We have a responsibility to exercise stringent oversight over any policy move that could ease Russia sanctions.” Before sanctions relief can be granted, the Russia Sanctions Review Act requires the Administration to submit to Congress: “A description of the proposed sanctions relief for individuals engaged in significant malicious cyber-enabled activities, those contributing to the situation in Ukraine, and those engaged in certain transactions with respect to Crimea; Certification that the Government of the Russian Federation has ceased-ordering, controlling, or otherwise directing, supporting, or financing, significant acts intended to undermine the peace, security, stability, sovereignty, or territorial integrity of Ukraine, including through an agreement between the appropriate parties; and cyberattacks against the United States Government and United States persons. The U.S. Senate and House of Representatives will have 120 days to act — or decline to take action — on any proposed sanctions relief. During this period, the President may not waive, suspend, reduce, provide relief from, or otherwise limit the application of sanctions with respect to the Russian Federation.”  More information on the legislation is available at https://www.lgraham.senate.gov/public/index.cfm/press-releases?ID=9A319FD9-DF9A-4245-A5C1-61EEF4F1E2F9 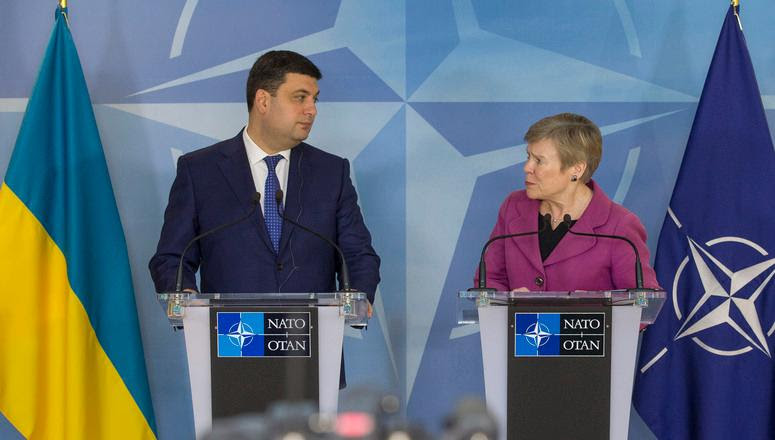 3. NATO reaffirms unwavering support for Ukraine
Ukraine’s Prime Minister Volodymyr Groysman met with NATO Deputy Secretary General Rose Gottemoeller today in Brussels. At a press conference following the meeting, Gottmoeller stated, “We just discussed the serious situation in eastern Ukraine and NATO’s support for your country. Since Russia’s aggressive actions began three years ago, NATO has stood by Ukraine. This will not change. Last night, I chaired a special meeting of the NATO-Ukraine Commission where we discussed the latest facts on the ground. Every single Ally took the floor to express strong support for Ukraine’s sovereignty and territorial integrity. NATO does not, and will not, recognise the illegal annexation of Crimea and we condemn Russia’s continuing destabilisation of eastern Ukraine. […] Ukraine is continuing on the path of reform and anti-corruption despite these very difficult circumstances. And the Prime Minister and I just had a very serious discussion about the continuation of the reform process in Ukraine. I commend you on your efforts. I encourage Ukraine to continue to press ahead with such reforms. NATO will continue to provide political and practical support to Ukraine.”
4. US Mission to OSCE: Russia continues to supply, sustain, direct fighting in east Ukraine
Speaking at a meeting of the OSCE Permanent Council, US Charge d’affairs Kate Byrnes stated, “Recent fighting has already taken an enormous toll on the lives of those living in the conflict-affected area. At least 51 civilians living on both sides of the contact line have been injured or killed since January 29. A large explosion in Donetsk city destroyed 20 apartments and left dozens of families injured and traumatized. […] Shelling has also destroyed homes and damaged schools in Avdiyivka, killed two people, and wounded two more at Ukrainian government humanitarian centers. The shelling even killed a civilian first responder when it exploded over his ambulance. We are aware of reports of another incident in Svitlodarsk, in which a Russia-backed separatist shot and destroyed a clearly-marked military ambulance – killing the medic and wounding several others. This is unacceptable. Russia, which continues to supply, sustain, and direct the fighting in eastern Ukraine, has yet to speak out against and put a halt to the shelling and other attacks on civilians in Ukrainian-government territory. Nearly two weeks have passed since combined Russian-separatist forces launched an offensive in Avdiyivka that claimed the lives of at least 10 Ukrainian soldiers and wounded no fewer than 80 more. There is clear evidence of a military buildup by combined Russian-separatist forces in the area in advance of the offensive. […]We again call on Russia to end its aggression against Ukraine. Our sanctions remain in place. We again call on Russia to comply fully with its commitments under the Minsk agreements. Proscribed weapons must be withdrawn, a comprehensive ceasefire must be sustained, and effective border monitoring must be established. We again call on Russia to observe the Helsinki Final Act, in which all participating States agreed that one another’s frontiers are inviolable and that they will respect the territorial integrity of each participating State.” The full statement from the US Mission to the OSCE is available here: https://osce.usmission.gov/ongoing-violations-russia-ukraine-2/
0 Likes