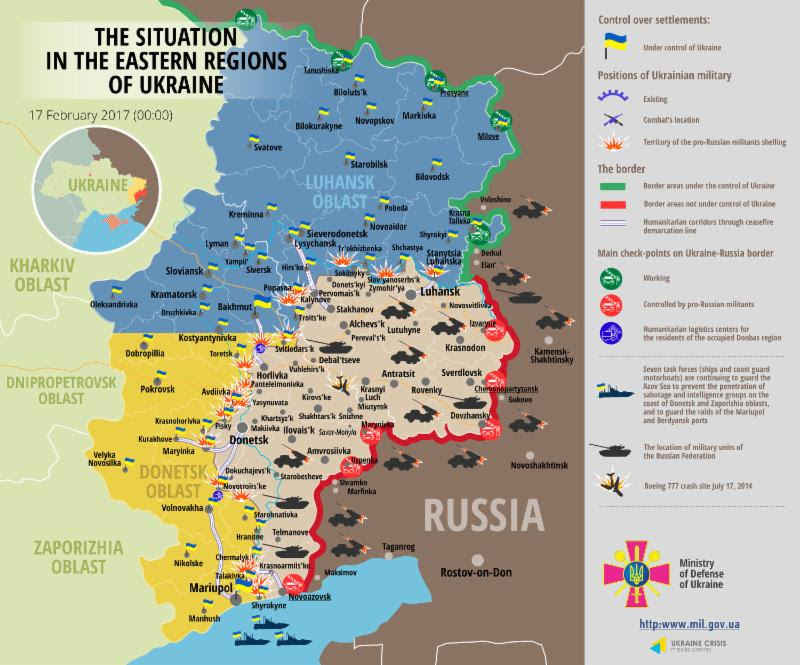 2. Chief of Ukraine’s General Staff: 2197 Ukrainian soldiers have been killed since start of Russia’s invasion
Ukraine’s Chief of General Staff General Viktor Muzhenko stated that since the beginning of Russia’s invasion of Ukraine in 2014, 2197 Ukrainian soldiers have been killed in action and nearly 8000 have been wounded, Radio Svoboda reported.
3. Ukraine takes Russia to European Court of Human Rights over illegal ban of Crimean Tatar Mejlis
The Kharkiv Human Rights Protection Group (KHPG) reported, “Ukraine is taking Russia to the European Court of Human Rights over its ban of the Mejlis or representative assembly of the Crimean Tatar People.  Russia’s criminalization of the self-governing body of the main indigenous people of Crimea has been described as ‘a hostile act against the Crimean Tatars’ and as a new low for Russia. The Mejlis has clearly been declared ‘extremist’ because of its opposition to Russian occupation, so it seems inconceivable that the Court in Strasbourg will not find Russia in grave violation of the European Convention.  The problem is chiefly the time taken to consider such cases, during which still more members of the Mejlis are likely to face imprisonment or other forms of repression. Pavlo Petrenko, Ukraine’s Justice Minister announced on Feb 9 that the application was being agreed with the Mejlis before being formally lodged.  It will be the sixth inter-state suit brought by Ukraine against Russia over the latter’s invasion and annexation of Crimea and its military aggression in Donbas. Although the formal ruling banning the Mejlis was on April 26, 2016, with this upheld by the Russian Supreme Court on Sept. 29, repressive measures began shortly after Russia’s invasion and annexation of Crimea.  The Mejlis had called on all Crimean Tatars and other Ukrainians to boycott the pseudo-referendum with which Russia attempted to give legitimacy to its land-grab.  Veteran Crimean Tatar leader and former Mejlis leader Mustafa Dzhemiliev was banned from his homeland in April 2014, with a ban on the current Mejlis Head Refat Chubarov following in July that same year. […] The banning of the Mejlis as ‘extremist’ came in stages, probably to see how much condemnation there was abroad.  There was never more than ‘deep concern’ and Russia moved from threats to specific action.” The full report from KHPG is available at http://khpg.org/en/index.php?id=1487026146
4.Former NATO Deputy SecGen: Ukraine is making progress against tough odds. It deserves US support
Former NATO Deputy Secretary General (2012-16) Alexander Vershbow wrote in The Hill, “Building a democracy isn’t easy, even in the best of circumstances. As a diplomat for over 40 years, I have seen firsthand how difficult it has been for the countries of Central and Eastern Europe to overcome the legacy of Soviet authoritarianism, root out corruption, and establish free societies and market economies based on the rule of law. No country in this region has faced more formidable challenges than Ukraine. […] Ukraine has had to continue the reform process with a gun to its head, both literally and figuratively. It has not been easy for Ukraine to start a reform process from the ground up, especially while it has been fighting to protect its freedom and independence from Russian aggression. Russia has worked to undermine Ukraine through its illegal annexation of Crimea and sponsorship of an armed insurgency in Eastern Ukraine […] Yet, remarkably, Ukraine has persevered and is on the right track. Ukraine has embarked on a wide-ranging anti-corruption campaign to dismantle the institutional roadblocks that have thwarted reform in the past. With a focus on law enforcement, the civil service, public procurement and the energy sector, more institutions have been reformed in the last two years then in the preceding 23. […]It is of paramount importance that Ukraine be given the support it needs to foster democracy and overcome its post-Soviet legacy. The United States has been a leader in this regard, thanks to strong bipartisan support for Ukraine within Congress. Ukraine deserves continued political, economic and military support, including the possibility of lethal military assistance should Russia and its separatist proxies continue their aggression in Eastern Ukraine – a conflict that has claimed the lives of 10,000 Ukrainian citizens. A sovereign, democratic Ukraine finds itself undermined at every turn by a provocative Russian neighbor desperate to see it fail, yet Ukraine is moving forward against all odds. The Ukrainian people know firsthand how hard it is to build a democracy. They deserve our reassurance they are not in this alone.”
0 Likes