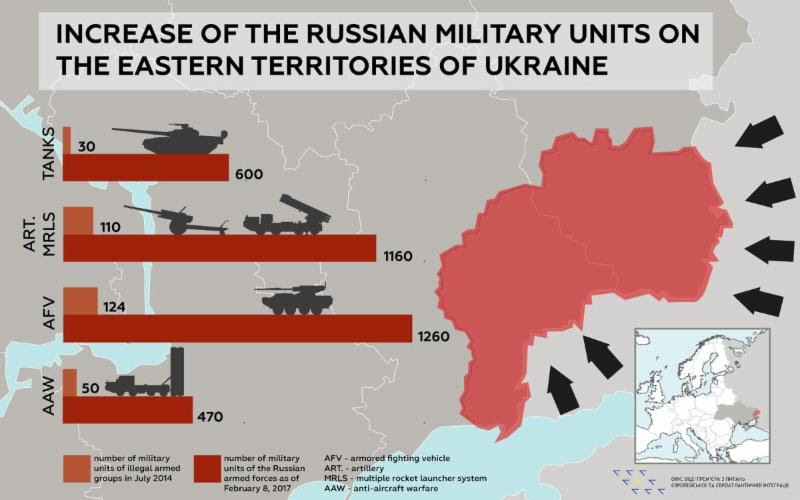 1. Russian Invasion of Ukraine
The General Staff of Ukraine’s Armed Forces reported that during the week of February 10-16, four Ukrainian soldiers were killed and 18 Ukrainian soldiers were wounded in action on the eastern front. Throughout the week, Russian-terrorist forces opened fire 424 times on Ukrainian positions on the Luhansk, Donetsk and Mariupol sector of the front, including 65 times with heavy weapons – mortars, artillery and tanks.
2. Chief of Ukraine’s General Staff: 2197 Ukrainian soldiers have been killed since start of Russia’s invasion
Ukraine’s Chief of General Staff General Viktor Muzhenko stated on February 17 that since the beginning of Russia’s invasion of Ukraine in 2014, 2197 Ukrainian soldiers have been killed in action and nearly 8000 have been wounded, Radio Svoboda reported.
3. Canada-Ukraine Free Trade Agreement Implementation Legislation Passes House of Commons
The Act to Implement the Canada-Ukraine Free Trade Agreement (CUFTA) was adopted by Canada’s House of Commons on February 14 by a vote of 304-0. The Act now moves to Canada’s Senate, where first reading took place on February 14. 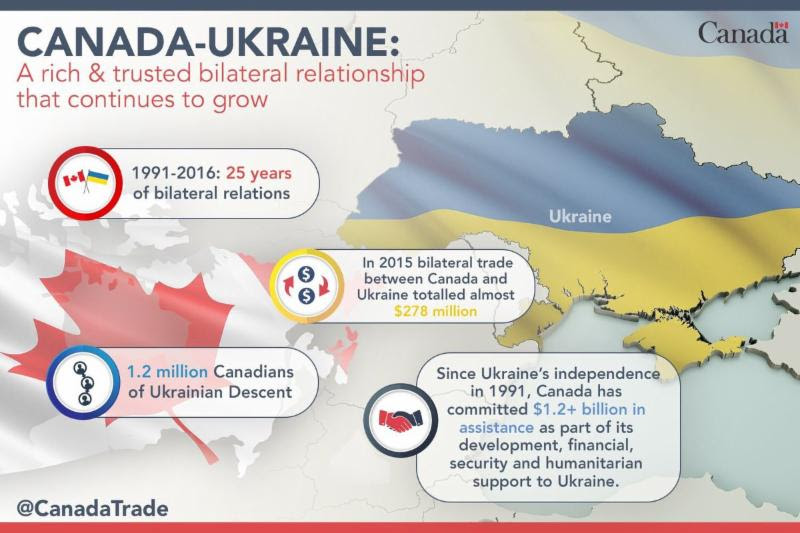 4. European Film Academy, Amnesty International Protest against Russia’s illegal imprisonment of Ukrainian filmmaker Oleg Sentsov
On February 11, the European Film Academy reported, “On the occasion of a screening of THE TRIAL – THE STATE OF RUSSIA VS. OLEG SENTSOV by Askold Kurov, Agnieszka Holland, Volker Schlöndorff, the European Film Academy, and Amnesty International have protested against the incarceration of the Ukrainian director Oleg Sentsov. Presented by the Berlinale and the European film Academy as part of the Berlinale Special section, the Berlinale premiere had filmmakers team up with with the 650 spectators holding up signs demanding the release of the director. […] EFA Chairwoman Agnieszka Holland said: ‘Oleg needs us but we also need Oleg. His courage is very relevant in times like these, maybe more so than two years ago!’ In May 2014, the Ukrainian filmmaker Oleg Sentsov, who was involved in supporting the Euro Maidan protests in Kyiv and who has opposed the annexation of Crimea by Russia, was arrested by the Federal Security Service of the Russian Federation (FSB) in his house in Simferopol. […]At end of what Amnesty International describes as ‘an unfair trial in a military court’, Oleg Sentsov was sentenced to 20 years in jail for having committed ‘crimes of a terrorist nature’. In his documentary Askold Kurov investigates the truth behind this political show trial. He was joined in a conversation after the screening by EFA Chairwoman Agnieszka Holland, Oleg Sentsov’s cousin Natalya Kaplan and his lawyer Dmitrii Dinze.” 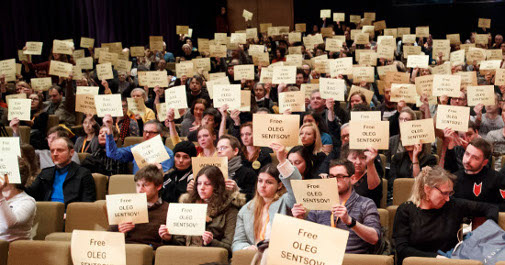 5. US Mission to the OSCE on Ongoing Violations of International Law and Defiance of OSCE Principles and Commitments by the Russian Federation in Ukraine
At a meeting of the OSCE Permanent Council on February 16, US Charge d’Affaires Kate M. Byrnes stated, “The attention of the Permanent Council has been focused for the past several weeks on Avdiyivka, where combined Russian-separatist forces launched an offensive that resulted in the highest number of civilian and Ukrainian military casualties since the battle of Debaltseve in February 2015. Damage to critical infrastructure left thousands without power, water, or heat for days in subfreezing temperatures. The situation has now stabilized. Repair crews restored power and water service; thousands of families in the area now have access to other critical services. Yet provocations and ceasefire violations continue on the line of contact […]We call on Russia to demonstrate that it will no longer pursue a policy of aggression in Ukraine’s Donbas region […] As the Permanent Council is aware, our sanctions for Russia’s aggression in Ukraine remain in place. Russia’s violations of international law and defiance of OSCE principles and commitments continue in Crimea, which Russia occupies and purported to annex, and where it continues to commit serious abuses. Russia continues the repression of Crimean Tatars and ethnic Ukrainians. Russia attempts to stifle those who speak out against its brutal occupation and to silence independent media. Residents of Crimea are being denied the ability to access at least seven online Ukrainian news sources, including some of the most widely-read Ukrainian news sites. Moreover, Russian authorities continue to refuse Ukraine’s request to return filmmaker Oleg Sentsov and activist Oleksandr Kolchenko to Ukraine. Both were arrested in Crimea, transported to Russia, tried there on spurious charges and given lengthy sentences over a year ago. We call on Russia to release these individuals and all other Ukrainian citizens it is holding on political pretexts. This includes Mykola Semena, a Ukrainian journalist who faces up to five years in prison for merely expressing his belief in Ukraine’s unity and territorial integrity. […]Crimea remains an integral part of Ukraine within its internationally recognized borders. We renew our call on all OSCE participating States to reject Russia’s occupation and attempted annexation of Crimea. Sanctions will remain in place until Russia returns full control of the peninsula to Ukraine. We again call on Russia to observe the Helsinki Final Act, in which all participating States acknowledged that one another’s frontiers are inviolable and committed to respect the sovereignty and territorial integrity of each participating State.”
6. Washington Post: US Senators from both parties pledge to deepen probe of Russia and 2016 election
The Washington Post reported on February 14, “Top Republican and Democratic senators pledged Tuesday to deepen their investigation of Russian involvement in the 2016 presidential election in the wake of Michael Flynn’s resignation as President Trump’s national security adviser, opening a new and potentially uncomfortable chapter in the uneasy relationship between Trump and Capitol Hill. Senate Majority Leader Mitch McConnell (R-Ky.) said such an investigation is ‘highly likely,’ and the top two members of the Senate Intelligence Committee, Sen. Richard Burr (R-N.C.) and Sen. Mark R. Warner (D-Va.), stood side by side Tuesday to announce that the committee’s ongoing probe must include an examination of any contacts between Trump campaign officials and the Russian government. Flynn resigned late Monday after revelations of potentially illegal contacts with Russia last year and misleading statements about the communication to senior Trump administration officials, including Vice President Pence. ‘We are aggressively going to continue the oversight responsibilities of the committee as it relates to not only the Russian involvement in the 2016 election, but again any contacts by any campaign individuals that might have happened with Russian government officials,’ said Burr, the chairman of the intelligence panel. Added Warner, the vice chairman, ‘The press reports are troubling, and the sooner we can get to the veracity of those press reports or not, then we’ll take the next appropriate step.’ […]The two senators were initially at odds over whether the committee’s probe should include potential ties between Trump campaign officials and the Russian government, with Burr suggesting that it was outside the panel’s purview. On Tuesday, Burr defended the committee’s right to look at those potential contacts, including any that may have occurred before Trump’s inauguration. And he has the support of Senate GOP leadership; in addition to McConnell, Sen. John Cornyn (Tex.), the majority whip, and Sen. Roy Blunt (Mo.), the GOP conference vice chairman, also called for investigations into Flynn’s actions.”
0 Likes