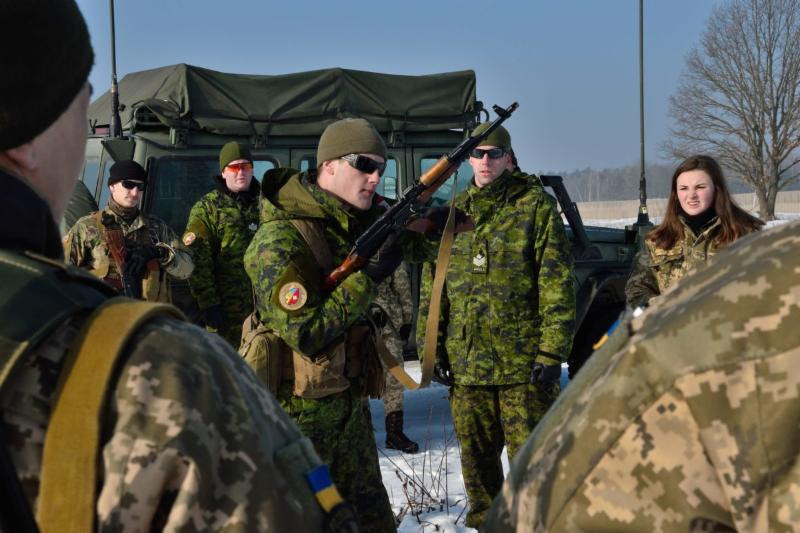 Canadian Army soldier training Ukrainian personnel #OpUNIFIER
1. Russian Invasion of Ukraine
The General Staff of Ukraine’s Armed Forces reported at 12:30 PM Kyiv time that in the last 24 hours no Ukrainian soldiers were killed and one Ukrainian soldier was wounded in action. Towards Donetsk, Russian-terrorist forces shelled Ukrainian positions near Avdiivka with mortars and tanks, firing over 150 mortar shells. Near Svitlodarsk, Zaytseve and the Donetsk airport, Russian-terrorist forces fired on Ukrainian positions with grenade launchers and high-caliber machine guns. Towards Luhansk, Russian-terrorist forces shelled Ukrainian positions near Popasne. At Stanytsia Luhanska, Russian-terrorist forces fired on Ukrainian positions with grenade launchers. Towards Mariupol, Russian-terrorist forces shelled Ukrainian positions at Vodyane and Shyrokyne with mortars. In the last 24 hours, Russian-terrorist forces opened fire on Ukrainian positions 59 times in total.
2. US at UN: Sanctions will remain in place until Russia fully honours Minsk and returns control of Crimea to Ukraine
Speaking at the UN Security Council on February 21, US Ambassador Nikki Haley stated, “It can be tempting to take Europe’s peace and security for granted. Europe is a continent of strong, stable democracies. And Europe is a continent of flourishing economies that benefit from close cooperation. But Europe faces serious challenges – most acutely, Russia’s attempts to destabilize Ukraine and infringe upon Ukraine’s sovereignty and territorial integrity. […] More than three years ago, the Ukrainian people took to the streets to speak out against political oppression and corruption. These protesters demanded freedom, democracy, and respect for the rule of law, and they succeeded in creating a new Ukraine. The United States continues to stand with the Ukrainian people. But Russia has tried to prevent the change that the Ukrainian people demanded. Russia occupied Crimea and attempted to annex this piece of Ukrainian territory – an act the United States does not recognize. Russia then armed, financed, and organized separatist forces in eastern Ukraine, leading to a devastating and senseless conflict that has cost more than 10,000 lives. The scenes of destruction from the town of Avdiivka in recent weeks show the consequences of Russia’s ongoing interference in Ukraine. Russia’s recognition in recent days of purported passports and other illegitimate documents distributed by Russian-backed separatists in Ukraine’s Donetsk and Luhansk regions is another direct challenge to efforts to bring peace to eastern Ukraine. […] Greater cooperation with Russia cannot come at the expense of the security of our European friends and allies. That is why the United States calls on Russia to respect Ukraine’s sovereignty and territorial integrity. That is why we continue to urge Russia to show a commitment to peace – by fully implementing the commitments under the Minsk agreements and ending its occupation of Crimea. The United States and the EU remain united in this approach, keeping sanctions in place until Moscow fully honors its Minsk commitments. Our separate Crimea-related sanctions will remain in place until Russia returns control over the peninsula to Ukraine.”
3. Joint Task Force – Ukraine shares chaplaincy experience with the Ukrainian Armed Forces
In an article published by Canada’s Department of National Defence on February 17, Joint Task Force – Ukraine stated, “Twenty-two Ukrainian religious leaders recently finished a two week military chaplaincy course hosted by Joint Task Force – Ukraine. The course was marked with a closing ceremony on February 10, 2017, at the Hetman Petro Sahaidachny National Army Academy in Lviv, Ukraine.’My aim for this course was to present a model of chaplaincy based on the experience of the Royal Canadian Chaplain Service and to facilitate discussion among Ukrainian chaplains as they develop a clear vision of their own multi-faith chaplaincy model,’ said Lieutenant-Colonel Claude Pigeon, Commandant of the Canadian Forces Chaplain School and Centre and head instructor on the course. The course included working with the military chain of command, leadership skills, and working as a chaplain in a deployed setting. […] Five Canadian Armed Forces chaplains and five Ukrainian religious leaders with experience in military chaplaincy taught the course. The Canadian and Ukrainian staff took turns giving presentations. Working together in this way mirrored the Ukrainian Armed Forces’ efforts to develop a chaplaincy model to suit the needs of their diverse society and military. Similar to the wide array of religions represented in the Canadian Chaplaincy branch, the Ukrainian training audience was made up of several faith groups. These included Greek Catholic, Orthodox, Roman Catholic, Evangelical, Baptist, Pentecostal, and Muslim.”
4. UK House of Commons unanimously passes Magnitsky legislation
The UK House of Commons unanimously adopted UK Magnitsky sanctions legislation on February 21. The Magnitsky sanctions legislation was part of the UK Criminal Finances bill, and will allow the British government to freeze assets of human rights abusers in the UK. Bill Browder, leader of the Global Magnitsky Justice Campaign, stated, “The new Magnitsky Sanctions Legislation is going to cause perceptible fear for kleptocrats in Russia and other authoritarian regimes. They all have expensive properties in London and think they are untouchable.” The Magnitsky Justice Campaign stated, “In response to the impunity demonstrated by the Magnitsky case in Russia, the US passed the Russia-focused Magnitsky Act enacting US asset freezes and visa bans in 2012 and the Global Magnitsky Act which applies to human rights violators around the world in 2016. Estonia passed its Global Magnitsky Act legislation in 2016. Currently, Canada and the EU are considering their own versions of Magnitsky sanctions as well.”
0 Likes