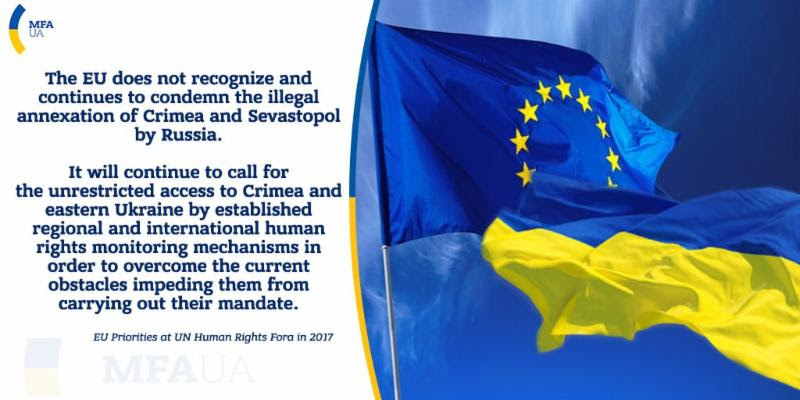 3. EU adopts conclusions on EU priorities for UN Human Rights Fora in 2017
The Council of the European Union published its priorities for UN Human rights fora in 2017 ahead of the 34th session of the UN Human Rights Council, being held February 27-March 24. The EU stated, “The EU does not recognize and continues to condemn the illegal annexation of Crimea and Sevastopol by the Russian Federation. In light of the deeply concerning human rights situation on the Crimean peninsula and the serious human rights violations and abuses linked to the conflict in eastern Ukraine, the EU will continue to support initiatives led by Ukraine addressing these issues within the Human Rights Council and the General Assembly, as well as to lend full support to the UN Human Rights Monitoring Mission in Ukraine. It will continue to call for the unrestricted access to Crimea and eastern Ukraine by established regional and international human rights monitoring mechanisms in order to overcome the current obstacles impeding them from carrying out their mandate.”
0 Likes