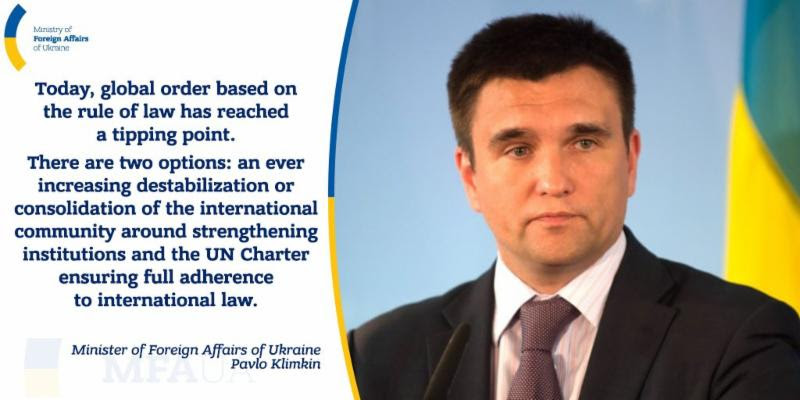 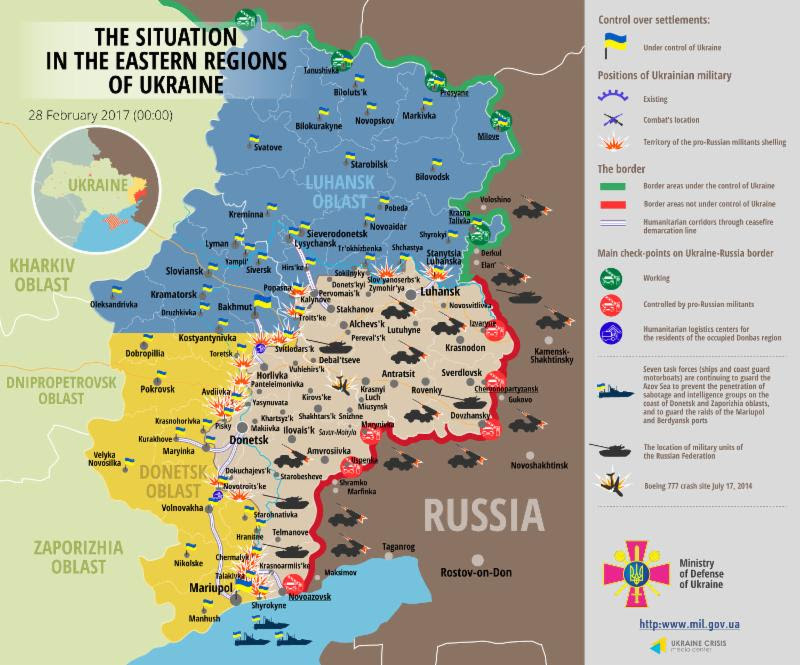 2. Statement by Ukraine’s Foreign Affairs Minister at UN Human Rights Council
Speaking at the 34th session of the UN Human Rights Council, Ukraine’s Foreign Minister Pavlo Klimkin stated, “Today no one has doubt in crucial role of human rights as one of the main UN pillars together with peace and security and development. Indeed, when all three of these pillars are strong and coordinated, they form a solid safeguard for people. Whenever – and wherever – any of these elements weakens, it endangers the whole system and if not further prevented might evolve into the vicious circle of ruining lives and environment all round. […] It is quite easy to indicate one common source of this insecurity in Europe – one state that considers himself ‘more equal than others’. A strategy to instigate, participate, support and then derail instead of mediating has been used by this state to create a number of volatile hotspots across our continent. This strategy was applied in Georgia in 2008. It was vigorously activated in Ukraine since 2014. My country endures direct military aggression; with Crimea and part of Donbas being illegally occupied by the Russian Federation. To date 10,000 have been killed and more than 22,000 wounded in Donbas, and Crimea has become a ‘grey zone’ marred by injustice, terror and repression. The occupying authorities commit systematic violations of human rights and they seek to destroy the identity of Ukrainians and the indigenous people of the peninsula – the Crimean Tatars. […] Today, global order based on the rule of law has reached a tipping point. There are two options: an ever increasing destabilization or consolidation of the international community around strengthening institutions and the UN Charter ensuring full adherence to international law. […]Despite the ongoing external aggression, Ukraine has embarked on a path of comprehensive reforms. Taking forward the human-rights agenda of the reforms is an integral part of this work, which includes implementation of the National Human Rights Strategy and the respective National Action Plan – in close cooperation with civil society and supported by technical assistance from international organizations including the UN.”
3. Russia and its proxies not allowing Red Cross to visit Ukrainian hostages held in Russian-occupied territories
Ukraine’s representative to the Trilateral Contact Group (Ukraine-OSCE-Russia) humanitarian subgroup Iryna Herashchenko stated that Russia and its proxies, the so-called Donetsk and Luhansk “People’s Republics” are not allowing representatives of the International Red Cross to visit Ukrainian hostages held in Russian-occupied territories in Ukraine’s east, Radio Svoboda reported. Herashchenko stated that the Red Cross “was allowed into prisons even by the odious dictatorial regimes of Hussein and Qaddafi, today the Red Cross is working in Syria, providing humanitarian aid to the civilian population. The only ones not allowing the Red Cross into prisons, not allowing the Red Cross to search for those who have disappeared, not allowing the Red Cross to see hostages or pass letters to family – is Russia and the [Peoples’ Republics]. Despite all the promises of Putin in the Normandy Format meetings, despite all calls by world leaders, despite all calls by Ukraine that the apolitical, neutral mission of the Red Cross should be doing this work […] The question ‘why they’re not allowed in’ is rhetorical, probably – they are hiding something from the world.”
4. Globe and Mail Editorial: When will President Trump respond to Putin’s Aggression in Ukraine?
In an editorial published February 27, the Globe and Mail stated, “Donald Trump seemed to feel a special affinity for Russian President Vladimir Putin when he was campaigning for a presidential office of his own. Among other things, he shares Mr. Putin’s taste for bullying. But now the bullies who lead two world powers are beginning to bump into each other, and Mr. Putin – the far more experienced political operative – is getting the better of Mr. Trump. Less than a week after a supposedly friendly phone call between the two at the end of January, the pro-Russian forces in the southeast of Ukraine – the so-called Donetsk People’s Republic – tripled their warfare against Ukrainian government forces. […]Eventually, Mr. Trump will have to wake up and realize he looks weak on this front – surely not the image he wants to project to anyone. […] Mr. Trump needs to respond in a sensible and forceful manner. It’s clear that Mr. Putin has decided to test the American President and see how far he can push. At the moment, it must feel as though he can do whatever he wants, and that is a danger to the whole world.”
0 Likes