In Memory of the Heroes of the Heavenly Hundred17 February 2017Next 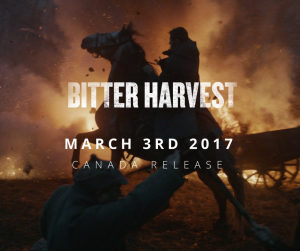 March 1, 2017. OTTAWA. The feature-film Bitter Harvest, which is based on the events of the Holodomor Famine-Genocide, 1932-33 in Ukraine, premiered in Canada at the Canadian War Museum in Ottawa on February 28.

Bitter Harvest takes place in Ukraine during the Holodomor – the Genocide perpetrated against the Ukrainian people by Soviet dictator Joseph Stalin and his regime. Bitter Harvest is a powerful story of love, honour, rebellion and survival, told through the eyes of two young lovers caught in the Holodomor. 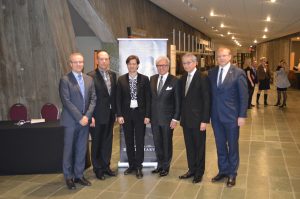 “My desire in producing Bitter Harvest was to reach the hearts and minds of viewers and draw attention to Ukraine and Ukrainian history,” stated Mr. Ihnatowycz. “The scale and magnitude of the Holodomor – where millions of innocent Ukrainians died in the famine genocide engineered by Joseph Stalin – is a story the world must hear and remember. It is considered one of the greatest crimes against humanity.”

“Thanks to the efforts of Mr. Ihnatowycz and the cast and crew, millions of people in dozens of countries will be able to learn about the Holodomor,” said Paul Grod. “For too long, this Genocide was hidden by the Soviet regime from the world. This moving and poignant film stands as a tribute to the millions of victims of the Holodomor, and to the Ukrainian peoples’ enduring struggle for liberty.”

Bitter Harvest premieres in theaters across Canada on Friday, March 3. The film is distributed in Canada by D Films, and more information can be found on the film’s website by visiting www.bitterharvestfilm.com

For showtimes and to buy tickets across Canada please visit the Cineplex website:

In Toronto – Bitter Harvest is also playing at Humber Cinemas